Putting the F back into the hobby 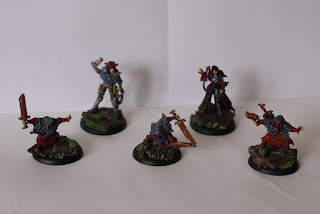 So, back with another blog. And this time, there are some words..... We've been discussing what to play recently and have stumbled across a number of new games. Whilst 40k will probably remain our staple game withall the armies we have and the fun that we have playing it, The recent GW price rises have really opened other games up to us (and

it's not like we were shy about them before!) but when you consider that you can get a gang/crew/posse for a whole host of other games for the same price as a Rhino or even a Land Raider for the larger games, it suddenly becomes all you need to enable yourself to play all the games you've seen lurking on the internet or admired the figures for. So, on that note, enter Malifaux!

This is my first crew, that of Sonnia Criid, the Witch Hunter. her crew works against people who cast spells mainly and she's a member of the Guild, who try to bring law to the lawless steampunk victoriana game that is malifaux. I decided that I just had to get her painted, so here she is along with her gang. I'm not a huge fan of the sculpt of the taller guy with her, but her sculpt is great and the Witchling stalkers in the front are fantastic, really deep cloaks. I went with red on all the figures to tie them together (red is the faction colour of the guild) and she also gets a purple dress as she's the leader ;)

And that brings me nicely onto the title of my post. The F is for "fun" you see and that's what I'm having with all these new figures. And I've learnt that now I have less time for hobbying with a 1 year old toddling around the place, I need to choose things to work on that are fun. There are 19 base coated Wyches on my painting table, 3 half built ravagars in the garage and 4 raiders that need finishing off, not to mention the 20 warriors that I need to build. But for some reason i couldn't face doing them, so I did my malifaux crew. And now I've started on four 8th Army deacons and 2 german Vielferwachers that I found whilst putting the deacons together. I have no particular plan for when I'll use any of them, but they really got my enthusiasm going, so I started on them!

I do need to get my Dark Eldar army done, but I'm sure I'll get enthusiastic about them at some point, but right now I'm bouncing all over my miniatures collection, building and painting the stuff that looks like fun, as opposed to working to an army list. Mighty refreshing and heck, fun is what this hobby is all about after all! So hopefully there'll be many and varied posts about lots of random miniatures that I'm finishing over the coming months.

Tres Cool my man. Very nice to see a new game up and running. Hopefully someone else will be along soon with a painted crew.

Mine are in their box. Will now have to find a way to tie yellow ribbons on them all!

Fun is definately where we're heading with a plentitude of games suddenly open to us.