In a fit of good sense and concentration rarely witnessed anywhere near my painting table, I managed to keep on going with the Blackstone Fortress figures and have now completed all of the adversaries.  I figured I'd get these done first and then treat myself to the Adventurers.

They're all converted/re-purposed and the first lot are the Traitor Guardsmen.  These are converted from the plastic chaos cultists set of figures.  A fair few head swaps and arm/weapon swaps with plastic Cadian guardsmen to make them more traitor guardsmen than generic cultists and lots of Imperial guard kit (radio pack, canteens, etc) help them along, as does the standard "army" green and brown paint scheme. 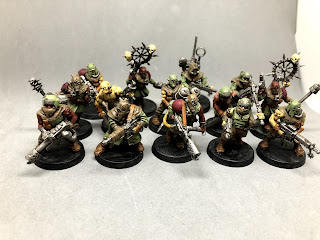 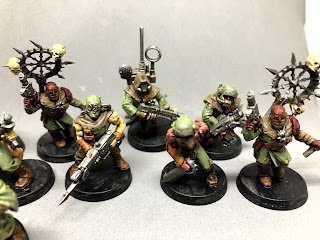 I've always rather liked beastmen, so I was pleased when I saw GW were including them in the Black Fortress game.  When I started 40k, back in the "Rogue Trader" first edition days, the Beastmen were part of the Imperial Guard.  They operated in abhuman packs and served in order to pay penance to the Emperor for having been born mutants!  I decided to bring this idea back and so my beastmen conversions are built using plenty of Imperial Guard kit, including a couple of breastplates. 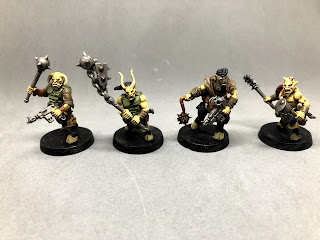 The awesome flagellants kit helped too, with  bell, weapons and arms
. 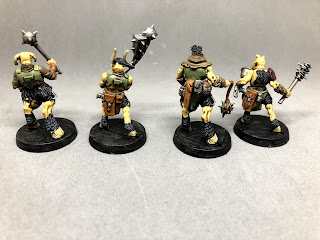 Next up are the big baddies - Chaos Space Marines!  These are smashed together from all sorts of chaos space marine and space marine kits and leftovers from other conversions.  I've always found the Black Legion a little boring (as well as not really wanting to paint black armour.....) so I went for my favourite traitor marine chapter instead - Word Bearers. 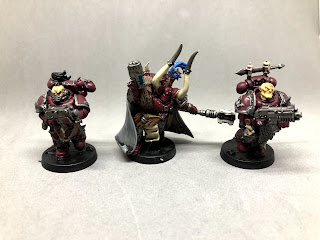 The Wordbearers are the real baddies of the 40k world, having been the ones who started the Horus Heresy in the 30k setting by making pacts with daemons and dragging other discontented legions in with them.  I'm particularly pleased with the Chaos Lord as he uses a cloak I really like.  For his helm I found the largest and most OTT helmet I could (not too hard in GW kits!) to help him stand out and hopefully catch his horns on the ceiling of the fortress, allowiing us adventureres time to escape.....  The other two are deliberately kept quite standard to help the lord stand out even more. 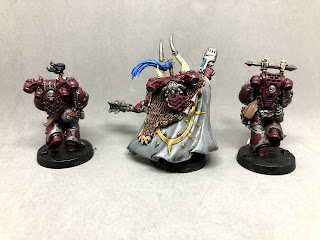 One of the fun things about converting is how ideas come to you whilst converting, like the idea of making my beastmen part of abhuman imperial guard squad.  The idea for the Rogue Psykers came when I decided to do Wordbearers as my chaos space marines.  It occurred to me that instead of doing psykers like the ones in the box, I'd instead make them the leaders of the Guardsmen, who have been given to the Wordbearers to make into daemonhosts.  It's this that gives them their horrifying psychic powers...... 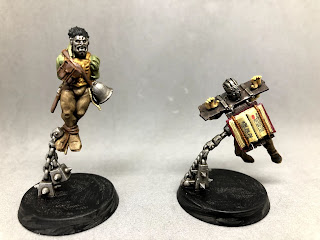 Some masked heads, a bell and an unholy tome with stocks completed the look and the gold breastplate marks one out as the captain. 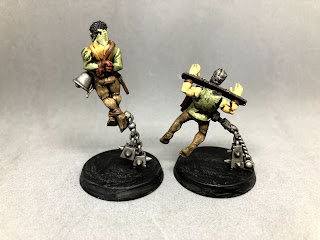