I've not done any work on my Pulp City scenery for ages despite having collected and painted loads of it. I still don't actually consider it ready as I've not added any vehicles.

I three years ago (gulp!) I brought two 28mm resin cars to add to this set. I'd deliberately not painted them yet as I'd intended to try and do some cheap moulding from them to make some car parts to add to the scrapyard part of my scenery collection. Of course that was the plan but I'd not gotten around to it.

I ended up having a free hour at the weekend and it struck me that it could be a fun and slightly messy thing to do with the kids...so out came the tin foil and plaster to give it a crack. 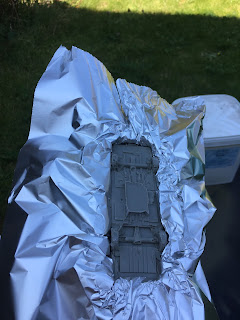 I wrapped one side of the cars in foil, gently starting with the roof and carefully pressing it down around the body of the vehicles. There was no way to avoid creases but I wasn't too worried as they are meant to be junk! The surplus foil on the sheet was rolled round to add some support to the mould for when the plaster was added. 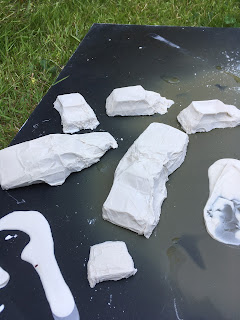 I extracted the originals fairly carefully then gave the foil a poke and a prod to deform it. Then the plaster was poured and left for an hour. I wasn't sure at this stage but hoped that they would come out okay. 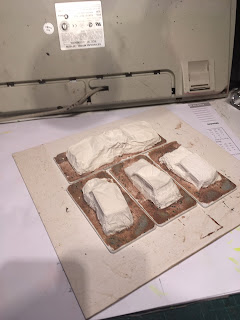 I wanted to protect the edges of the plaster at the base as I suspected it would chip easily there. I thought the best way would be to mount them on some plastic basing material which also meant I could use the sand to help them look like they were buried slightly. 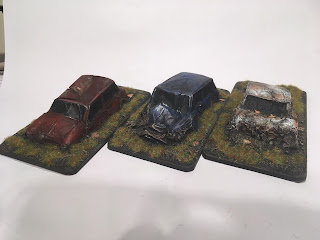 Just paint after that to finish them off. Simply bit of weathering and they were all sorted.

Now I just need to paint the proper vehicles!

Very interesting! The results are great, sold by the paint job.