Tonight I'm chuffed. I've finished my GoG army for the PMBE this weekend. 1800 points from scratch in 2 and a half months. Wow. And do you know what? I've really enjoyed painting this lot up; so much so that I want to finish off the 4th squad of Bezerkers and a squad of Possessed (that I've had since the plastics were released...) 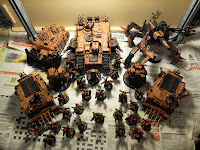 Anyway on to a couple of pictures of the army; not the best quality pictures but they convey that the army is all together. You might notice a couple of Dreadnoughts in there and think "they're not World Eater Dreads!". You'd be correct: had lots of trouble getting the Forgeworld Dreads to stick so ended up raiding the boxes of bits and converting up 2 Assault on Black Reach Dreads that I recently swapped with VariStat. Necessity is the mother of invention and/or deadlines focus the mind! 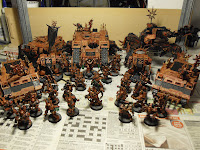 ... and Kharn. What can we say about Kharn? Whilst he was maiming my army the other week Silverback suggested I should put some kind of scorecard on his base: then paint on the new Betrayer kill total after each battle. I liked this idea so took it away, mulled it over and came to the conclusion that a scoreboard of some sort was definately required; something to stand out and advertise Kharn's lethality.

So this is what I came up with: 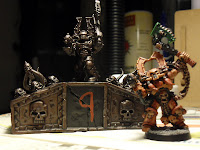 As ever - the pics do not do these justice. The paint job is perfect and the scoreboard is a work of genius.

Well done you, now crack on with your Warmachine, Blood Angels, Orks, SoTR .....