Oi - Stop Shovin at the Back!

Now that the Daemons are done (well ok nearly done) I needed a new project. So, so tempted to get my Dark Eldar going but decided that since I have 3000 points (old book) already up and running that I can use that for now.

So it's time to clear the shelves.

That means either Orks, Wolves, Eldar or Warmachine. The Nids have gone to that great bring and buy in the sky and back to GW for changing into Dark Eldar.

Warmachine: not yet.
Wolves: don't fancy power armour.
Eldar: not going to happen and as it is Evil Monkey has decided to he wants to do Eldar alongside his new Blood Angels (chip off the old block: I'm so proud). So he's already done a test Guardian and has done a good job (must organise photo).

That leaves Orks. I fancy a horde army so with 40 Boyz already undergoing painting I decided to build everything else up. I will spray this once the weather warms up a little! 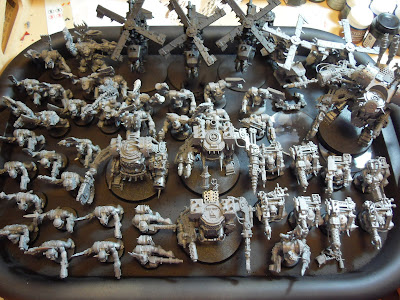 Here you'll find: 19 Boyz + Nob with Power Klaw, 10 Nobz including Painboy, Big Mek (well who can't resist the KFF?), Warboss, 5 Deffkoptas, 3 Killa Kans (lovely spiky new models), Deff Dread (gorgeous new plastic) and 8 Lootas. This leaves me with a Battlewagon to build and that will be 1750 done. All the Boyz have come from Black Reach swaps and I've still got another 22 left!! 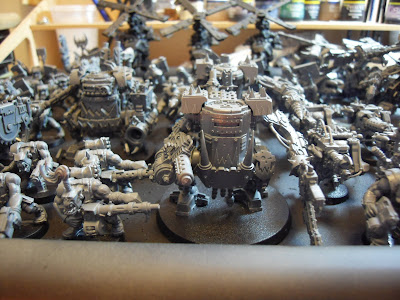 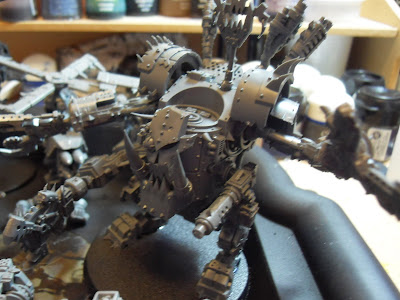 Expect Blue Orks on a tabletop near you in the coming months!!
Posted by Von

Loving the Kans and Dredd!

I've resisted getting my orks out so far but after a mauling from these I expect my resolve, already weakened from the Silverbacks biker Nobz, will probably crumble!

Get your Norks out for the lads!


Anyway, it is nice to know you use the exact same Ikea tray as I do to transport my models to and from the spray zone :)