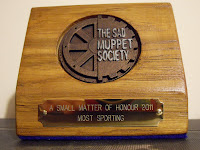 ASMOH 2011 has been and gone. I took the World Eaters with the addition of the Raptors and suffice to say my last game was fought on table 25. Out of 25. More detail after the jump thingy...

I've also added some pictures of my first Dystopian Wars Prussian Frigate and the Rhino I completed today for my Tzeentch meltagun squad.


ASMOH
Unfortunately I didn't take any pictures as I was far too excited with playing around on tables 6-24-22-25 and the 6 was purely because that was a randomly drawn first game.

Game 1 v Blood Angels (1250) - Annihilation
I lasted until turn 6 before my army was completely wiped out. I faced 10 Assault Marines and a Librarian in Razorbacks; 2 Furioso Dreads; 2 Predators with Autocannon and Lascannon Sponsons and 2 Baals. Yes that's right - 11 men and 8 vehicles. We killed a Dread and immobilised a Razorback: wiped out in return.

Game 2 v Eldar (1250) - Bases
This one went to turn 7. If it had ended on turn 5 I'd have scraped a draw but them's the breaks! Eldrad and his Striking Scorpions eventually destroyed my Defiler in combat having ripped off every weapon (that's 4 claws and a battle cannon); then they ran away from my scary Lord. Unfortunately the Lord was all that was left of my army and thus not a hope.

Game 3 v Marines (1750) - 4 Obj
This went to turn 6 before I was wiped out (definately a theme developing through out the day). Lysander was in charge of these marines and again my luck deserted me with the turn 5 game ending requirement: I had 2 obj to his 0 at the end of turn 5 but did I roll a 1 or 2? Nope... bugger.

Great game though and my Raptors proved to be the best unit in the game taking out 2 Attack bikes and an entire tactical squad before catching a Vindie shell on the head. It was one of those games where my Land Raider was taken out with the first shot of the game and you just know right there and then that's it not going to go well :-)

Game 4 v Dark Angels (1750) - 6 Obj
So to the bottom table and a fight for the wooden spoon against Callum. He only found out the day before that he was coming along so he picked up the nearest box and turned up with an entire foot slogging DA army. Belial leading it together with a mix of Termies and Marines. Not a vehicle in sight - they were probably on loan to all the Blood Angels players to be honest.

So that was my ASMOH experience until the awards were announced and suddenly I found myself with the Most Sporting Trophy. This is definately my favourite award to win at events as it's voted for by my opponents and I'd like to thank them all for making all my games so much fun. 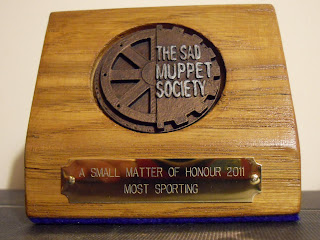 Oh and I will sort out a photo of the Raptors as they did me proud. Next up I really need a killy HQ and some firepower that isn't a Land Raider. Expect a Daemon Prince and Obliterators at some point in the future.

Dystopian Wars
Finally broken open the box for the Prussian Empire Fleet and I'm impressed by the detail on the ships. Decided to paint up one of the frigates to see if the colour scheme worked. 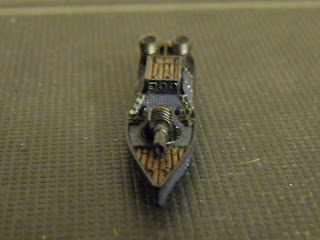 Not too bad and I've now started on the other 8 frigates with 3 cruisers and 1 battleship undercoated and awaiting my attention. 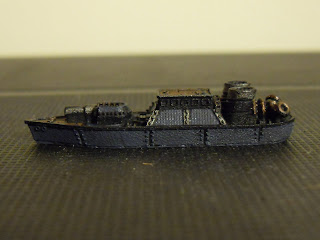 Paintscheme: Hull - Fenris Grey; Deck - Calthan Brown; Gun/Trim - Boltgun Metal; Tesla Coil - Brazen Brass. All washed down with Badab Black. May have to add funnel markings so I can remember who is who and perhaps a base at some point.
Hopefully get this fleet finished before the end of May as DIY is looming...

Finally a bit of 40K completed today: a Rhino for my Tzeentch Meltagun squad who have been borrowing one from the Thousand Sons who were not impressed. 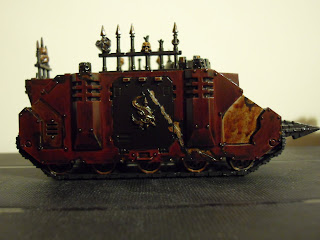 Dystopian Wars to continue, then DIY, then Sir's Land Raider for his Youngblood tournament. Not sure after that - so much on the shelves needing attention. Might have to start drawing lots...
Posted by Von

Still..nice to get an award!

Ship looks good and you'll be pleased to know that I too started painting my fleet.

So far they are based and the first slaps of paint have started!