The road to Dropzone Commander.

I’m not going to lie. The arrival of Dropzone Commander has been a strange rollercoaster ride for me and it shows how emotive these funny little games (please don’t stone me for that) can really be for us.

Back last year when the teasers started appearing I became suitably excited. I’d go as far to say lubricated! I was seriously intrigued as the pictures were released and checked every day for the new postings on Facebook. Great stuff! Great marketing by the guys at Hawk Wargaming. People were fair dribbling at the point when the website went live and the army sets were announced.

Then CRASH! HOW MUCH!! I admit I felt disappointed by the price and it was clear from the interwebs that I wasn’t alone. Cooler more rational voices (who knew we had any in the GoGs? Go figure!) prevailed and I soon came to realise that the starter set prices reflected the fact that you needed more to start the game and that the price shock probably came more from conditioning in the hobby making me expect a ‘cheap’ starter set rather than it not being value for money. Pack for pack the prices of the DZC stack pretty well against those in the industry.

Happier and re-enthused I plumped for the Shaltari starter with tailored storage foam and case. It cost a goodly amount but I felt, by that point, that I was getting value. Other GoGs committed and soon it was a game discussed in terms of painting queues which invariably means it will get to the gaming table sometime between 3 months and never. Now I’d championed the game somewhat within the GoGs because sci-fi at this scale has always appealed and as such I knew that if I wanted to see it reach the table I would have to drive it forward. So what was the next hurdle? Terrain. We didn’t have a jot of 10mm Sci-Fi between us so we were starting from scratch.

Hawk had this covered. Free downloadable paper terrain! The more creative members of the DZC community had printed these onto label paper and stuck it to foamcore for rigid buildings! Brilliant! Inspired! That will be my approach I thought and I set about gathering the required materials. I thought that this game would be great when we got it to the table. Still a way off but I was confident.

Meanwhile rumours started about DZC resin terrain. Scenery just like they had in the glorious pictures in the book.
Oooooooooh I thought.
Shiny I thought.
So I set to wait for its release before starting the buildings with the materials I had. In truth I wasn’t holding off working on them but more involved with other projects for WH40K.

Then CRASH! The resin terrain was released. I saw on a forum that someone had quipped “I wanted to buy a building but couldn’t afford the mortgage”. Very true. Lovely buildings but WHOOOOOA! Prices to scare most wargamers in to apoplexy! It would appear that this is what happened. I too was baffled by the business choices that led to the release of model buildings at real estate prices!

Bizarrely this made me feel down and disappointed. Not meaning to GW bash but I’d thought “oh great another gaming company making unfathomable business choices”. But I stuck with the game and read bits and bobs on the forums still with the intention of getting this game to the table but I admit I had slightly less enthusiasm. However it slowly seemed to appear that Hawk hadn’t marketed a turkey and I now think this may just have been a badly timed, poorly explained release.

Now I admit this is my interpretation of second hand info but it seems to me now that Hawk had the moulds for the buildings already as they had made them to do those lovely pictures for the books. I think Hawk then decided to release them, probably because they had the moulds, people wanted terrain and they probably wanted to maintain release momentum to keep interest buoyant. Hey….they’d already released free scenery so the really cool stuff would be there if people wanted it. The internet nerd RAGE ignored the free scenery at first and I got the impression that the high cost of the premium quality stuff created quite a bit of negativity for and towards Hawk Wargames. Not good for a young company. A real shame because I genuinely believe that Hawk never intended to be a greedy corporate monster as seemed to be the common interpretation but instead presented people with an alternative, albeit an expensive one. Why do I think this? Because of their most recent and significant product since the original launch; The City in a Box (or Cityscape set to give it the proper name). It is a product that clearly shows that they are trying to deliver to the community to enable people to play their game.

The Cityscape is quite simply the best gaming product that I have seen this year so far. Don’t get me wrong, it isn’t perfect. It is card terrain which was always a pet hate of mine but I’ve overcome this hatred because of this product. Easy to put together, cheap, good looking and it is totally fit for purpose. It also has the added advantage that it means you can get to playing…..really …really quickly. Everything you need in the box to fill 6x4 in 3D. Perfect. Only £30. PERFECT.

So this week I found myself at the point where we had fully painted figures, fully prepared scenery (I’d braced the corners and weighted it because….well I’m just like that) and two GoGs wanting to finally get to play the game. Maybe the internet amplifies some of the negative things as much as it inspires from the positive but the arrival of DZC on the table seemed to me to be ridiculously emotive. Am I the only one who gets hooked on these ideas and emotionally committed? Judging by the nerdrage I don’t think I am.

So were the ups and downs worth it?

Only a game was going to tell us.

Marge (The Silverback’s preferred moniker now she is post-Op) and I squared off on Wednesday night over the newly laid out Cityscape.

How cool is this? 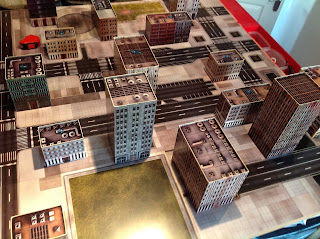 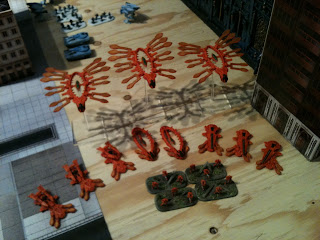 ….whilst Marge deployed her lovely PHR. The awesome scaled effect makes these look really cool. I’ll take this opportunity to say that Marge also looked lovely (Little compliments like this help at the moment as her hormone levels are still settling down after “The Change” and she gets a bit weepy). 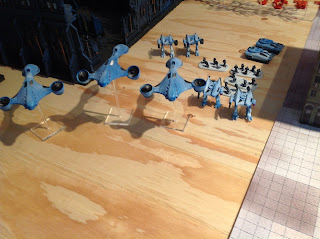 We plumped for the first mission and promptly got stuck in. We both knew that we would get things wrong or just plain miss things but as always, you’ve got to start somewhere. I got first initiative and my gateships started to glide into the city…….. 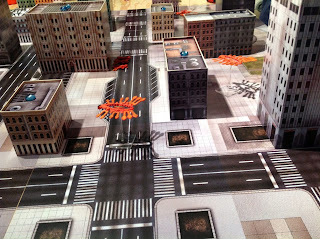 ….and the PHR surged forward to meet us. 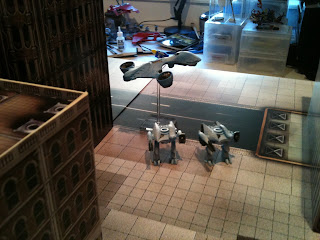 The first round ended quickly as both of us had just flown onto the board and very little had been disembarked troop wise. This changed on the second turn as we both started to get our troops into buildings and commence the search for Objectives. I do like the fact that there are actually rules for finding the objectives rather than just landing and grabbing them. It just feels a bit more realistic as it conjures images of troopers sweeping derelict buildings with scanners as they advance in squads. The second turn ended with some rather painful but well spotted AA fire from the PHR that downed a gateship that was moving forward to teleport some Shaltari AA tank onto the city streets. The dropship bit tarmac but thankfully, as the shaltari don’t actually ride in their dropships, the AA Tanks were safe in their orbital transports…..for now. 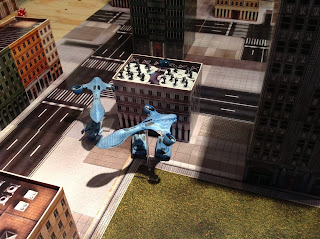 At the start of the third turn Marge’s troops found their objective first but my short-sighted Braves failed to discover anything in the disused tower block that they’d moved into. The PHR’s walkers and the Shaltari Tanks started to tangle with both sides losing vehicles as they traded shots. The Shaltari gaining success from their high energy weapons whilst the PHR’s numerous shots pierced the Grav Tanks energy shielding. The fire fight continued into the next round until the weight of PHR proved to heavy to bear and the Shaltari tanks were knocked out. Personally I think that moving forward wreaks should stay on the field with smoke plumes to add to the feel of the scenery. 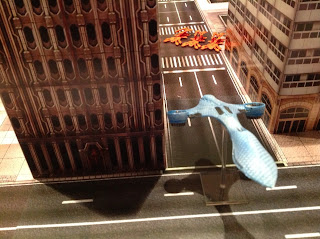 The Shaltari did mange to strike back by downing a PHR dropship but then, buoyed by this success, the AA tanks tried to take out some PHR Walkers. N’er. No can do. After lots of ricochets the walkers were completely unharmed and began to twist their torsos round to acquire a lock on the (extremely) foolish Shaltari light armour. With their heavier guns gone the Shaltari were forced further and further back as the PHR began to bracket their position. The only recourse left to the Shaltari was to collect the one objective that the braves had finally tripped over and get the flock out of Dodge. 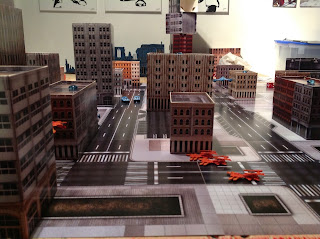 The freedom of the city meant a win to Marge and the tough and nasty PHR.

Now we know we have plenty to read and correct before the next game but the all important question.

Oh Yes! The strange switching emotional attitudes (Mine not Marge’s) encountered surely must have come from the fact that I was so looking forward to a game that promised lots of movement and cinematic visuals. I was not left disappointed neither was Marge.

At this level (starter sets) it is obvious that this game is probably meant to be played with either more troops and less armour or preferably just with larger forces. Hence the fact that Marge already has the new PHR she ordered and mine are currently under the influence of the post (shakes fist skyward in defiance of Kevin the god of postal workers).

Next game we’ll be trying to add the command cards and probably giving the next scenario a crack. I’m confident that we’ve missed some points about embarking etc but we can build on what we done next time.

Nice work Hawk. For the GoGs it is going to be a keeper.

Is it just me or does this post need to have the music from Simon Bates' "Our Tune" playing while you read it? ;)

All fair points though Eddie, good to hear the game seems good enough to stick around for some table time.