So, Nick and I decided to re-open the Eastern Front and so my Soviet soldiers stood ready to counter-attack the aggression of the invaders….. They were pretty much the same lists as last time we played as neither of us had done much to our armies. We also realised the last time we’d played was the final week pre-twins, so about 15 months ago! 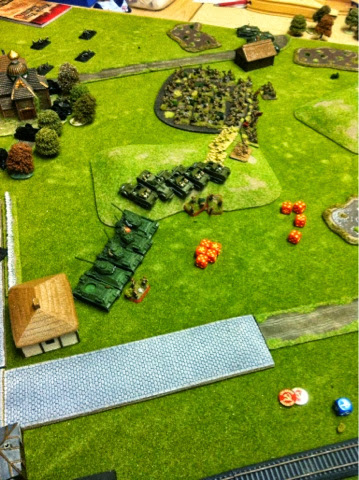 Both our armies set up on the table and I sent a small platoon of 7 bases to sneak up the left flank to keep the defenders there honest and frankly everything else set up threatening the right flank. And then just steamed forward in a Warhammer type formation :) The wood is chock full of infantry and the armour are T-34/85s, SU-57s and SU-122s on the far side.

I did include air support this time and it either didn’t turn up each turn or only had 1 plane arrive – see the blue dice for proof!

Anyway, opposing the Soviet advance was a platoon of dug in FJ, 5 marders (horrible little things) and 4 P4s who appeared out of nowhere in ambush, but fortunately at long range given the Soviets swift advance forcing them back a little. 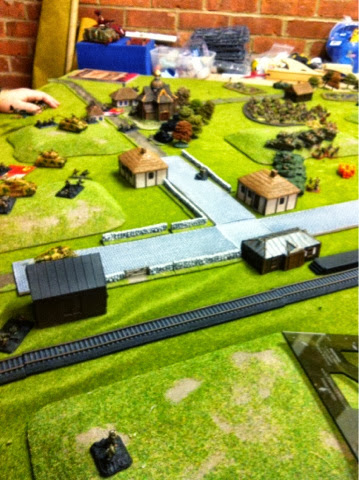 I couldn’t hit Nick’s forces due to the extra modifier from Hen & Chicks, so over to Nick in the shooting gallery…… which was utterly woeful as Nick’s brand spanking new dice deserted him. The upshot of 16 high calibre shots and an accurate mortar barrage was one wrecked SU-57 and 5 other chaps bailed out across the platoons (you can just see them standing behind their vehicles) as Nick couldn’t buy a Firepower test on 3+ to actually destroy anything….. The P4s, so stunned by their lack of success, failed their stormtrooper roll to get into hiding.

So, the brave Soviets shot back and the T-34s were outstanding – needing 5s to hit from 6 dice, they hit 5 times….. and passed all of their firepower tests on 3+ to add insult to injury. P4s all destroyed (mainly because they failed their Stormtrooper roll on the last turn). The Marders were taken down to the last vehicle, who then failed his morale check and ran for the hills. So, in the middle of turn 2, Nick had all of his armour destroyed and it looked grim….

My planes also decided to turn up and at least pinned the defending FJ platoon and my massive 25 stand infantry unit ran into the open and found themselves in assault range - Losing 5 out of 6 hit bases to defending fire wasn’t great though, but the asssult was on!

Only 3 bases made it close enough to attack and needing 4+ to kill, promptly rolled a 2, 2 & 3. Ah. Oops. The FJ counterattacked and got 7 (!) bases close enough to attack and only needed 3+ to kill bases. This could well embarrass the Soviets and ruin the attack…… but Nick promptly missed with 5 of the 7 attacks! The Soviets took heart and the swirling melee continued for a number of rounds (you keep having rounds until someone breaks off) and the upshot was only an HMG left to the FJ (who also lost their CiC in the melee) and the Soviets down to half strength. The Kommisar having to shoot one stand as an example to the rest of the platoon to make them hold their nerve in the middle of the fight. 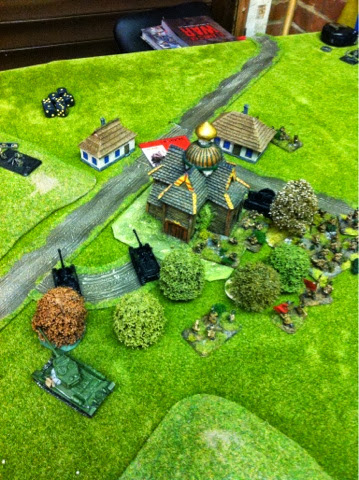 As the dust settled, it appeared that my consolidation moves had accidentally claimed me the objective (the two teams in the distance hiding bravely behind the house) and Nick was unable to get anything close enough to the objective to contest it.

So, we got a game in, re-learnt some rules and Nick’s horrible turn of shooting followed by a great turn from my armour really put the FJ in a hole that they couldn’t getout of. Nick’s contempt for the Heer continues to grow as they let the FJ down yet again, the P4s in particular have always done poorly for Nick, so I think his idea of getting the FJ to crew his soon-to-arrive 88s is a good idea :)

But this means I have to get my FoW out of the loft and finish them! You are making work for me!!