Yep, it's another one of those "I haven't posted in ages, real life got in the way" blog posts that seem to be everywhere, pretty much all of the time. A combination of lost painting mojo, nothing inspiring and launching myself on a couple of large projects with no end in sight has meant that I haven't posted completed figures since March...... And they were just base coat + wash level bystanders.
But a week or so ago, I was moving the box with my salamanders in around the garage for the umpteenth time when I said to myself "you know, I should just get these done" and I was away!
So, first up are the rapiers. Up to three in a battery in 30k, so of course, I had to get three. That's one of the attractions of 30k for me, large formations and batteries of things as opposed to one on its own. 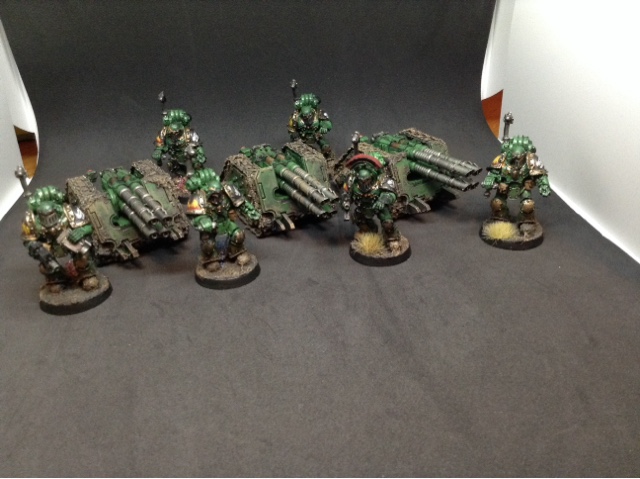 The same weathering tricks as the salamanders that I've already completed and the three laser destroyers give them the long range anti-tank punch that they were lacking. 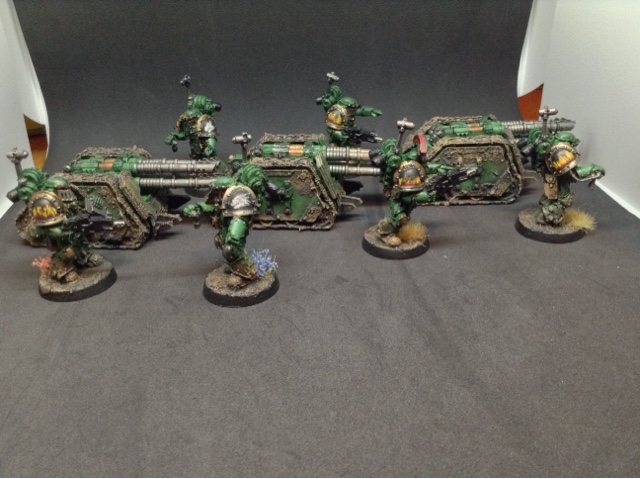 These next chaps have been sitting around to the stage of not having left arms, weapons or heads for an absolute age. I couldn't work out what weapons to give them...... Then I just decided that it had to be flamers as that's the signature salamander weapon. Now, these aren't the 30k flamers, I like the newer ones and decided that if anyone would be pushing the boundaries of flame weapons and coming up with new options, it would be the salamanders (and it saved me a few quid too!) 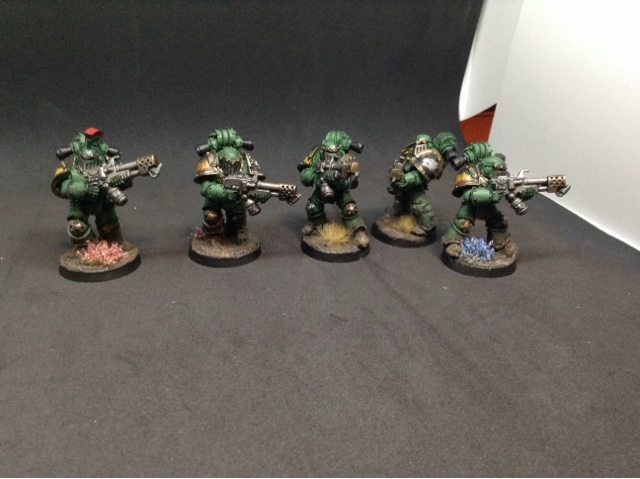 Next was a bit of housekeeping, two sargeants, made possible by the two spare crested helmets that I didn't have to use on the rapiers (each pair of crew comes with one). These are for the two infantry squads I've already completed and I hope you'll forgive me for converting a newer mark of armour..... But then it will be artificer armour after all! 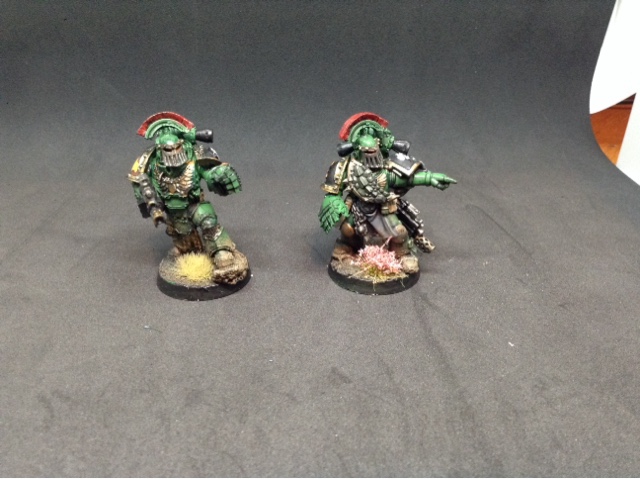 One has the shield from some Warhammer skink riders on his chest, mostly to cover the eagle. Combi flamers and power fists for both as the signature weapon and the power first to represent the slow and purposeful nature of the legion. 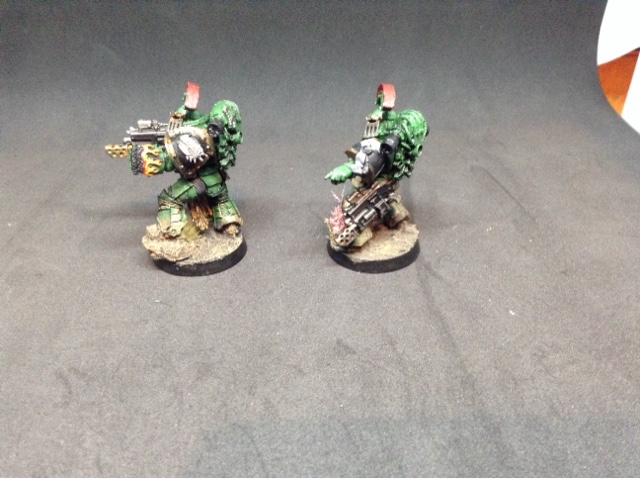 Saving the best 'til last, this is my HQ figure. Now, the silverback was a jolly nice chap when he was at Salute and picked up the "show only" HH figures for myself and Eddie. Mine happened to be an alpha legion leader, so whilst I seriously toyed with the idea of starting an alpha legion force to use him in (seriously, I need help), a flick through the HH legion rules for salamanders provided my answer though. The model had a snake and skull motif, so a chaplain sounded like just the ticket. There is a special salamanders character who is the first chaplain and holds a thunder hammer made of a single block of obsidian, wears artificer armour and rocks a dragonscale cloak. Here is my take on him 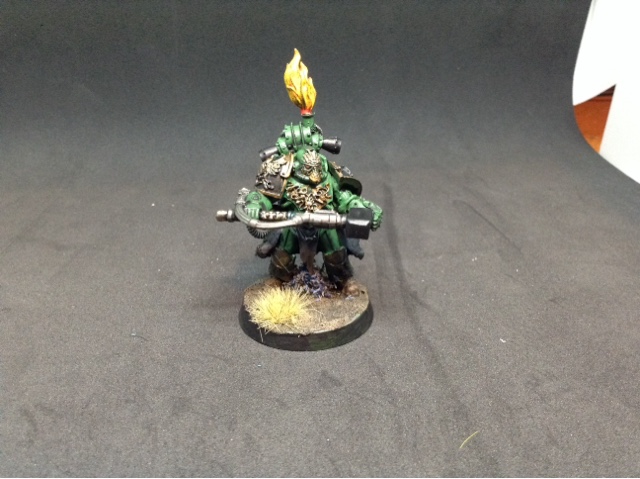 The head is the most ornate one from the salamanders helmet sprue that forge world do, most of the thunder hammer is from a standard 40k termie one and the head of the hammer is from the alternate dwarf weapon in the first 1980's box of 60 plastic Warhammer warriors (10 identical warriors from 6 different races). The dragonscale cloak is the neck of a warhammer troglodon........ 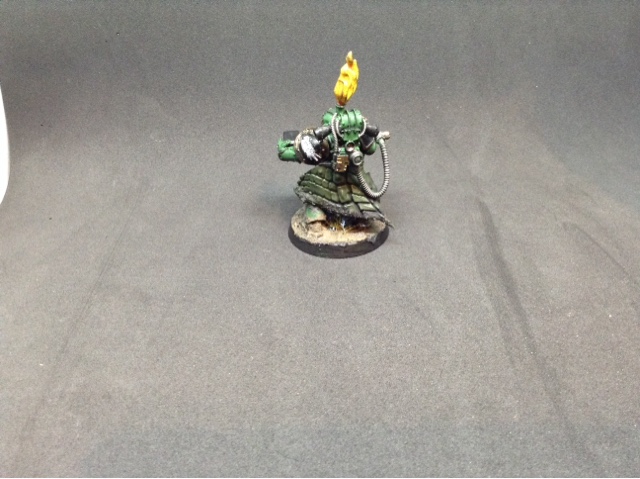 I tried to capture the realy ornate shoulder pad here (excuse my hand being in the photo, it was the only way I could find, not being very good with cameras, to dim the shot enough to try to catch it with out too much glare) 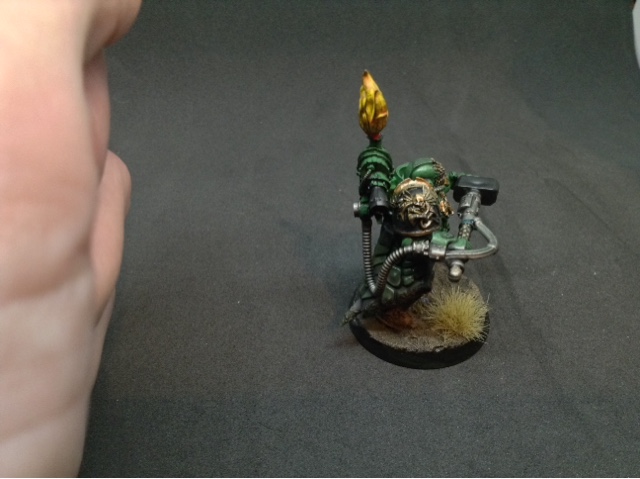 There we have it, enough salamanders for a decent sized army now and hopefully I'll remain inspired to get yet more done very shortly!
Posted by JamieM

They are looking awesome Urn! However the Rapiers are making me somewhat nervous.

That's an awful lot of anti-tank firepower they can out out.

This inspired me to glue my HH stuff together last night,

It has to be said that it also inspired me Urn. Lovely job as always!