And so it begins

Junt, Urn and I have been egging each other on quite a lot this year and the result seems to have manifested in to a challenge.

What challenge? To paint 365 figures in a year. This obviously equates to one a day which seems daunting but casting my eye back over the last year I seem to have painted well over 200+ items and that includes big scenery pieces that have taken more than a week for each one. I’ve also prepped and made lots of figures and scenery. Given that I often batch paint big groups of figures the target of 365 seems less scary.

A year dedicated to clearing some of the backlog of figures? Yeah I’m up for that.
Junt also mentioned that we should try and maintain momentum with the gaming itself and suggested 52 games in a year. Given how easily life distracts us from fun things, I think this is going to be HARD but hey…..I’m up for that challenge as well!

The 365 figures that I’m hoping to get done include:

Okay, that actually total in excess of 550 figures which will be something of a reach to achieve but that’s the reason for the challenge. Soooooo many figures waiting to be painted. I wish it were all that is sat unpainted in my study. Gotta start somewhere I suspose!

I was planning to start on January 1st but I need to get cracking on the Seraphon for February and as such I’ve started the challenge already. 11th December 2016 is the day of commencement and by this time next year I want to have completed at least 365 figures from the list above. We shall see.

The GoGs are heading for Nottingham on 10/02/17 and I need to have an army ready. I have the BFG’s seraphon on loan under the condition that I paint it and this is a convenient starting point. I’ve got 2 months to paint 70+ figures and I’ll be happy to get 30+ figures done per month as it’ll show me how difficult it is to keep on track.
Now the Seraphon should be a quick paint…. 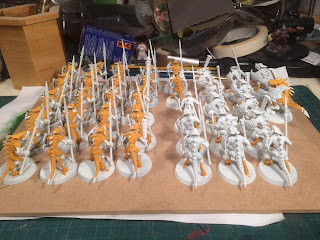 …but as usual I find a way to complicate the process. I’ve gone for a wash effect for the main colour scheme but I wanted to have their armour plates in a different colour but also tonally similar to the main colour. This means adding a base colour to parts of the model prior to the quick wash. Probably doesn’t actually take much longer but just feels like it when you’re trying to do 37 in one batch! Probably will only take one more evening to finish the first stage and then onto applying the wash.

It all seems so difficult when you put it like this!

I shall mostly be making it up as I go along and not thinking about the big numbers..... gulp!

Damn it I forgot Infinity and Dust.....and my Reaper Bones pledge

Jamie - I think this is just way too daunting - try to relax, and not paint anything, particularly anything 30k...