I was trailing behind on the 365 challenge. 3 months in and I only had 56 completed.

That has all changed! Finally finishing off the first tranche of 66 Epic figures I've managed to take the tally from 56 up to 122. Perfect!I'm well ahead now! I've also managed to squeeze in some extra stuff too. 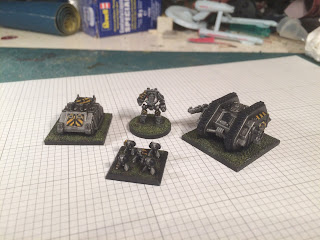 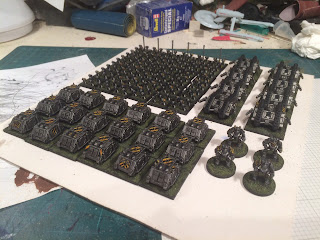 As we are planning to play Epic shortly I thought we better get prepared. The game requires blast markers for in game effects and I'd seen a nice tutorial on how to make some cool ones. Gave it a try and they worked out okay I think. 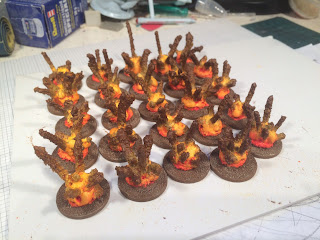 I've also been trying to prepare the next load of bits for the Iron Warriors but made some assumptions about how compatible 6mm stuff is. The turrets were from Vanguard and is transpires that their stuff, whilst lovely, is true scale. I posted this piccie to an Epic group on Facebook so people could laugh at me and my Noobiness but the owner of Vanguard responded offering to take them back for a full refund. Very Kind. In truth I'll probably just buy the tank chassis's that fit them. I still need predators after all! 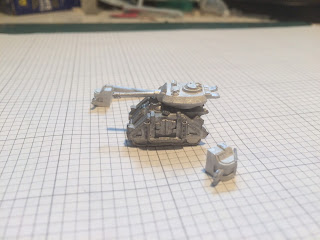 At work I've been making progress on the 28MM Iron Warriors. Slowly but surely painting the hazard stripes on their pads. They're home now for finishing so I am very much in the hope that within the next 7-10 days I'll have another 66 figures to add to the tally. Painting the stripes has been less frustrating than I would have imagined. I am really looking forward to seeing the breachers finished as they look so cool! 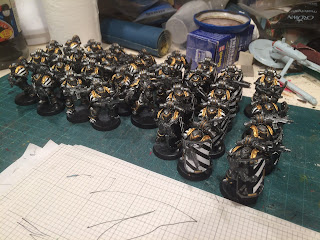 I've painted sooooo many stripes lately that I really need a break from Iron Warriors and the thought of painting some Orks is making me smile. Quick and fun and dirty! With that in mind I have started getting some Epic Ork stuff prepped at work ready to spray and shift home. 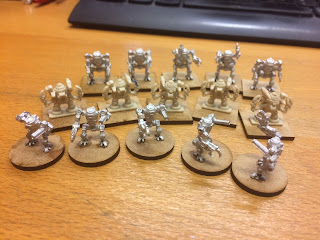 On top of all this I've managed to squeeze in a couple of games. No. 17 Was AoS with the Seraphon getting a right smacking from the combined forces of Undead and Chaos. Bastards. 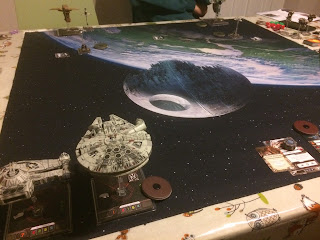 Game 18 was a quick game of X-Wing with Urn whilst we chin-wagged about Epic. Scum and Villainy earned their name as they stopped the heroic rebels from collecting vital cargo. That was medical supplies! Bastards!

Tomorrow night is a test game of Epic for me and Urn and I'm really looking forward to it!

I am amazed by your tally! Going big with 60 odd figures at a time can be frustrating, but awesome when you finish them....

And the scum and villainy needed those medical supplies! The black market doesn't run itself you know....

Excellent work on the Epic stuff and the Iron Hands. Well done. :)

Great to see Epic stuff in all scales! And those blast markers look great!

I do like the blast markers! And was fun to have a go at playing Epic again the other night; your Iron Warriors served me very well!