I've finished construction on the third Aeronef kit that I commissioned from Blotz. 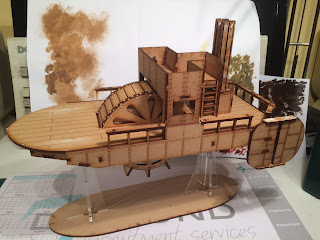 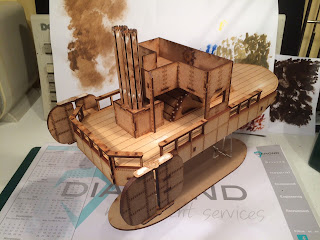 It has turned out really well and is a really easy kit to pop together. I'm pleased with how much deck space this one has although it will lose some of that once the monitor style gun goes on. The lack of railings at the front will also look less silly once the armament is on. The Roanoke class tug should be ready soonish hopefully and I'll get myself a deck gun when I order that. 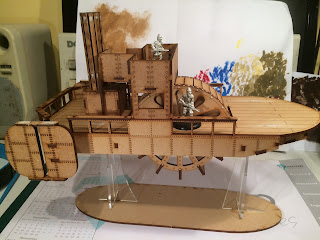 I'm going to go with an un-historically early US green as a colour scheme. I think it'll work well with the decking being a mix of browns. Question is: White Stars? I'm not sure when the US started using them but they are quite distinctive so I may well do some. 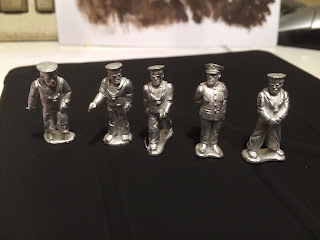 I found some of the Pulp Figure range last weekend at the Warfare show in Reading. I'm really looking forward to painting them up as crew for the 'Nef. The quandary here is whether or not to paint the uniforms blue with white trim or white with blue trim. I'm leaning towards the latter as I'm imagining my VSF Mars as being a temperate place more suited for the white uniforms.

Rules wise this project is looking decidedly like its not going to be Dystopian Legions but VSF under a completely different rules set. Urn suggested the konflict '49 rules and Junta has kindly donated a rule book with this in mind. It looks, on face value, as a rule set that should be easy enough to tweak to my needs. 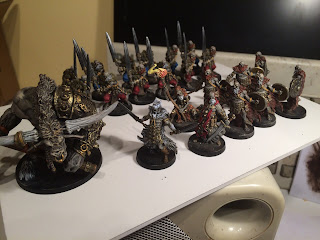 Work has also continued on painting Massive Darkness figures. the first tranche are nearly ready and these coupled with some hero figures will take me over my target of 365 for the year. Huzzah!

Awesome stuff - I have project envy! :)

Excellent looking Aeronef fleet you have there. I look forward to seeing more.