The Iron Warrior scouts had discovered the old bunker complex but had retreated to call in re-enforcements as the auspex’s had picked up signs that someone was using the old base. 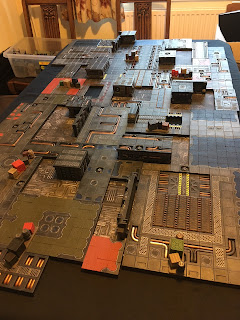 The power fist pulled the bulkhead door apart with ease. They were in. They come in force to find out who’d crept in under their radar. The shrieks of the torn metal were just dying out when the corridor erupted with the roar of bolter fire. Silhouetted in the doorway the terminator faltered momentarily under the barrage but then surged forward in to the storm of fire. Other entrances were being blown open and the Iron Warriors were in. Whomever was in there were fully aware that they’d arrived. 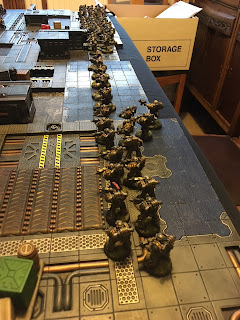 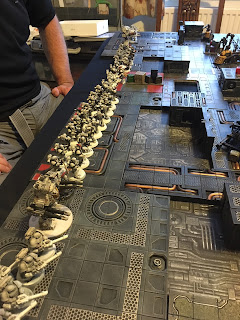 As the Iron Warriors pushed into the unknown they brought their own weapons to bear forcing the defenders to seek cover. Some didn’t make it. 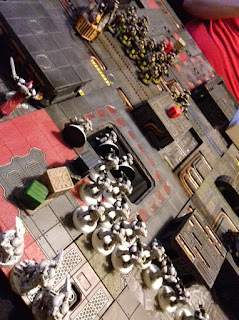 With the incoming fire briefly lessened the Iron Warriors push onwards. They must find out who it is they are facing! 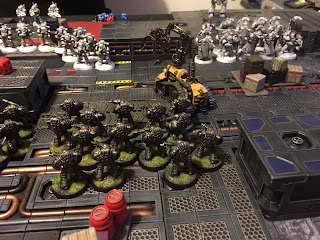 Powerful shards of las-fire pierced the gloom around the heavy footed terminators at the front of the assault. One found a target but the unrelenting armour defected it sideways sending masonry chunks flying as the beam gouged through the corridor wall. (1) The threat of the lascannons was quickly nullified as the weapons position was pounded by return fire. 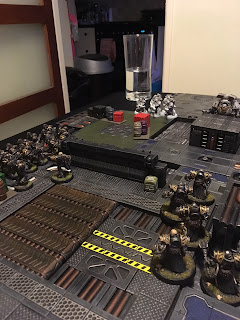 From the darkness came the unknown inhabitants of the underground facility. White armoured figures with stature equal to the Iron Warriors. Confused shouts echoed across the comms. Luna Wolves? Not the Sons of Horus? No. Luna Wolves. 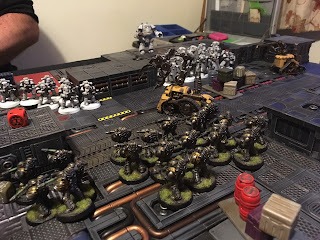 Calls went down the line to forge ahead with the attack. If they weren’t Sons of Horus then their allegiances were unknown. They must be dealt with! The two forces met in the confined space stirring up a deafening cacophony as shield bearing breaching troops met Dug in defenders. 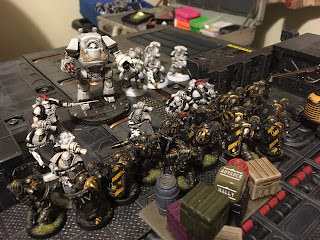 As las-cutters strobed in the furious melee the roar of combat intensified in the side chambers and tunnels around them. Happening across a gun line of Luna Wolves a unit of Plasma gunners from the Iron Warriors took a terrible green hued toll upon the Luna Wolves until they themselves were overcome by a fresh wave of troops firing bolt rounds at close range barely able to miss in the tight corridors. (2) 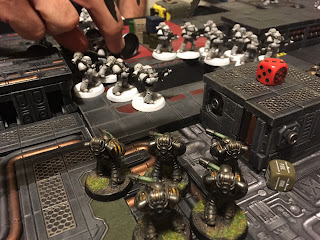 With the defenders falling the Iron Warriors pushed ahead only to be faced with the massive forms of dreadnoughts barely able to fit down the corridors to face the steel coloured invaders. The tide had turned. The massive machines broke the attack, forcing the Iron Warriors back out of the complex. Fighting the rear guard were the terminators facing off the mighty strikes of the towering dreadnought. The skilful 1st company warriors waited until the right time and then counter attacked bringing one of the dreadnoughts down. The falling goliath blocked the main entrance and the Iron Warriors withdrew. They’d been fought off but would be back with greater numbers. 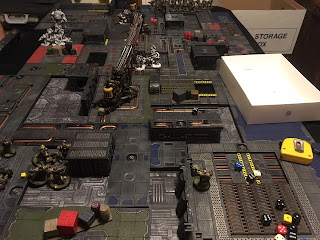 Upon their return the Iron Warriors found the place quiet, still and empty. Distant hidden exits were found flung open with signs that a sizeable force had departed.
Who were they? What were they doing?

A solid win to the Luna Wolves for Junta.

(1)    Junt tonked his rolls with a lascannon devastator squad and my termies were left unscathed!


(2)    20 man blob squads of marine can still give you a fair walloping back even after taking heavy casualties!
Posted by Eddy Artillery