The VSF on Mars project is a slow boiler but I am still working towards getting it all together. Not wanting to get to a point where the Aeronef are ready but nothing else is I have devoted a little time to working out what I actually need to do still.

Scenery is the biggest job after the Aeronef and painting the armies so I cast my mind to that. I need to source a bundle of pink foam for Martian rocks and landscape but I also wanted to have foliage. I’ve used the AliExpress website before to buy cheap stuff from China so thought I’d try there first.

Success! Lots of different Aquarium plants at cheap prices. The drawback of buying from China is obviously that you are taking a bit of a risk on the quality. Money wise you are pretty safe as the funds are held in Escrow until delivery is confirmed. Not knowing what the quality was going to be like made me decide to buy a few different ones from different suppliers so I was likely to get at least some that were okay. 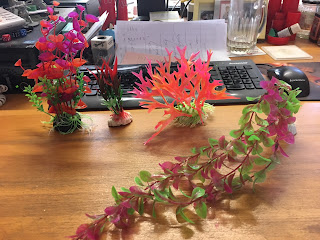 One set still hasn’t turned up, no great surprise as it’s coming from China, but fours lots have and I can say that I’m fairly pleased with them. I really like the left most one but it was the most expensive. Only £2ish but still more than the others. The centre two are pretty good as well and I suspect I will buy more of those first three types. The one on the right is okay. Big but limp and not really what I want for Mars. This said they look pretty good for filling out a jungle board so not a waste at all.
Just one set to go and then I’ll be deciding which ones to order more of. In the mean time I can use them for alien plants in my 30K/40K games. It's a fair amount of scenery for £20ish and there is still five more to come. 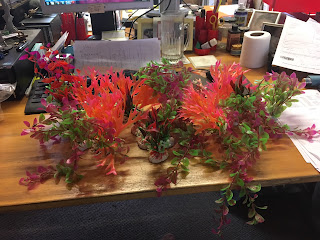 I am also still thinking of making some additional plant pieces and have done a concept sketch for the liftwood groves which will hopefully feature in the narrative campaign I am planning. 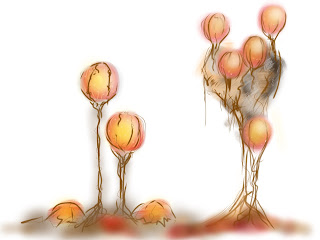 They shouldn’t be too hard to make with modelling clay balls and wire for the superstructure. I’ve got some hairy gardening string and I’m thinking about soaking that in watered down PVA before draping it over the globes as vines.

I’ve not got much painting done as I am still enjoying the CAD work and am currently working on some more sci-fi stuff with a Star Wars Legion feel to it. 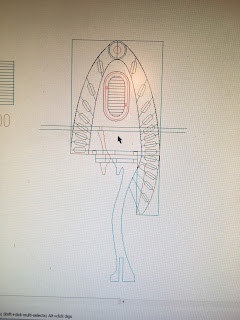 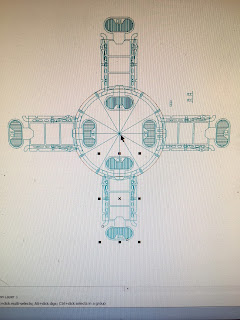 So….things progressing but nothing getting finished.
Harrumph.