I've cracked it.  Three posts and all of them on the same topic.  Which is now finished.  And allows me to play the game with all painted miniatures.  It's a good job I'm sitting down as I type this as the last time I achieved anything like this was the previous Warhammer Quest game GW did, "The Silver Tower"!  So I now present the Adventurers from the Blackstone Fortress game.

First up, the Rogue Trader (middle) himself and two of his buddies 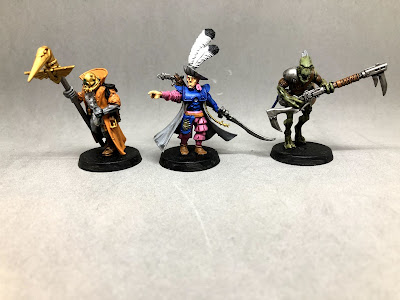 Rogue Traders go waaaaaaaay back in WH40k.  The first game was named for them after all.  They're essentially captains of lone ships or flotillas of ships and their remit is to explore the galaxy, investigating things and generally getting rather rich in the process.  Bit like Christopher Columbus in space.  They can have crews of specialists, Imperial Guards regiments and even space marine assigned to them to help them do whatever needs to doing spread the word of the Emperor, find new planets, contact new races and either steal their stuff, or kill them and then steal their stuff. 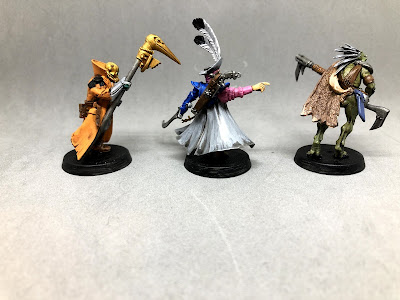 My Rogue Trader mixes kits from Warhammer Fantasy Battle and the 40k world and I'm rather pleased with his arrogant manner and gesture.  The adventurers in Blackstone Fortress represent the Rogue Trader Janus Drake and the motley crew that he's surrounded himself with.  The other two are a Kroot mercenary, now working with him (not much converting needed here, just a selection of stuff added and a pelt) and the Navigator.  Navigators are the mutant psychics able to pilot ships through "Warp Space" using their third eye which grows in their forehead.  I chose a helmet with something that could be a third eye and I rather like the staff which is also from a mix of kits. 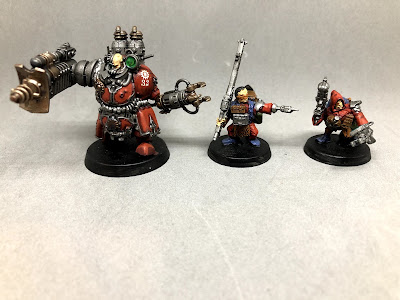 Next up are the Mechanicum related adventurers.  The two little chaps are Ratlings (Halflings in space) and one is a sniper with the other having a tracker and other assorted gubbins instead.  They started life as goblin bodies and with a few choice Imperial guard and skitarii parts they become ratlings.  The heads come from an old bretonnian sprue as  they really looked the part for me. 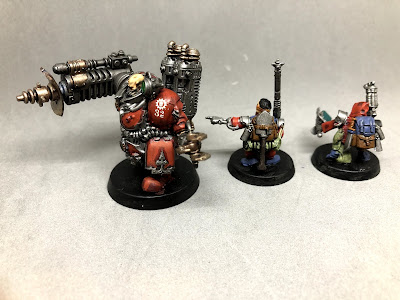 The last chap is the large robot explorer.  The one in the boxed set steps outside the usual Grimdark aesthetic and GW explain that he is a relic of a bygone age.  I like my future properly Grim and Dark though, so I converted him to be  a mighty servitor (cyborg) with an unfeasibly large gun and pinchy power claw.... 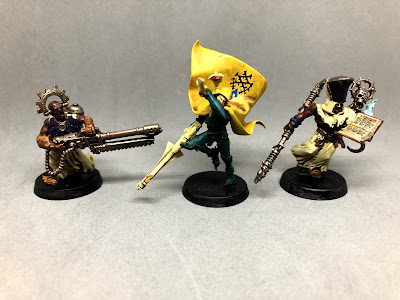 The last three are the religious pairing of a lunatic who likes to burn heretics and then chop them up with the chainsword that he's welded to the underside of his flamer (don't try this at home kids!) and a preacher who likes to read Harry Potter whilst slaying the unbelievers.  The third one is an Eldar and he's based on a fantastic Dark Elf assassin model who has been 40k-ified with the addition of a shuriken catapult and stuff on his belt. 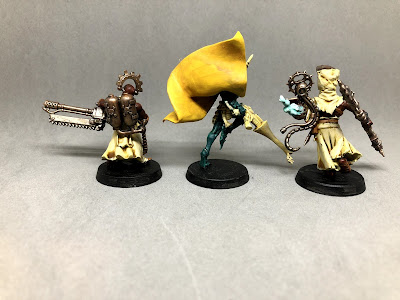 Lots of different parts in all of these and a real blast to build.  And we've even started playing!  Here are some of the adventurers in action. 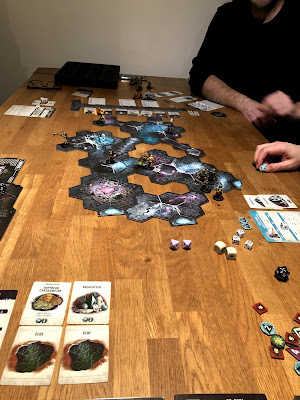 It's a great little system and we absolutely smashed it.  However, it's a legacy game and so you draw a card to see what gets added to the game after each expedition...... and after the first expedition we drew the mighty Chaos Lord so we may see him sooner than we'd like - yikes!
Posted by JamieM