A few years ago I stumbled across a fun little thing on the internet - a bunch of people who collected miniatures and had decided they needed motivation to get them all painted up.  So they decided upon a scoring system (bigger scales/models get more points) and they made blog posts about them on the same blog to encourage each other to get things painted.  The community of gamers and painters on the "Analogue Hobbies Painting Challenge" was such fun that I'm now on my fourth year!  It runs for about 3 months from December to March and is responsible for the vast majority of my painting output for the last few years.

Anyway, you can have "side duels" against other entrants where you challenge each other to paint the most points of something.  Two AHPCs ago (yes, two) I lost a duel to GregB which was based around how many points of Horus Heresy miniatures we could paint.  Greg absolutely smashed me and when I asked what figure he wanted, he asked for a survivor of the Drop site massacre..... Little did he know it would take me two years to actually make good on my promise (insert embarrassed smiley face here.....)  Now, for background, there were 18 Space Marine legions at the time of the Horus Heresy.  Four of them turned rogue and purged the loyalists in their ranks.  When this was discovered, 7 loyalist legions were sent to the Istvaan system to destroy them, attacking from space onto the Drop site where the four traitor legions were dug in.  Three legions made up the first wave and then the remaining four legions dropped in the second wave.... but these last four legions had also secretly turned traitor and so the 3 legions from the first wave were massacred in the crossfire with very few escaping.

It took me quite a while (and more than one abandoned idea) before I came up with what I wanted and here he is - Barek Furibundus, Dreadnought. 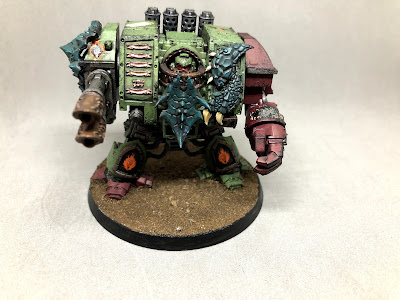 Barek is a dreadnought from the Salamanders Legion, one of those massacred in the drop.  The Salamanders revere and hunt giant lizards on their home world, hence the trophies on the carapace.  He fought bravely in the cauldron of battle, but suffered critical damage to multiple systems. 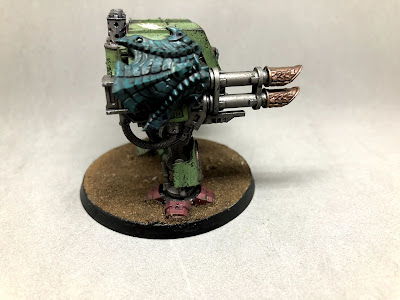 Left for dead, he was recovered by a scratch force including some from the Iron Hands legion, who are notoriously good with machines. 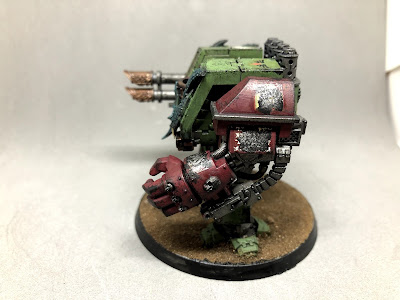 Repairing his cogitator system, but unable to save his original left arm and right foot, they salvaged alternatives from a Dreadnought from the Word Bearers legion - one of the traitor legions. 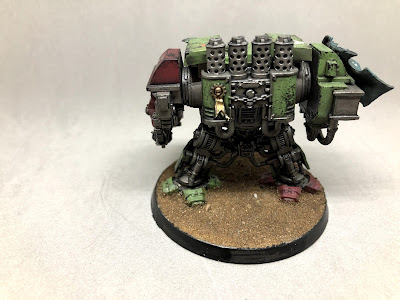 Deciding that having Barek rejoin the fight was worth the use of the heretic equipment, they effected battlefield repairs and so he fights on.  The Wordbearers Legion iconography has been crudely scratched off (decals added and then scratched/painted over..... am I mad?!?!?).  With his group managing to escape the battlefield on a commandeered Thunderhawk, Furibundus will fight on across the worlds of the 31st millennium, opposing the forces of Horus wherever he can to avenge his fallen brothers...

Anyway, a massive thank you to Greg for being a total gent and never once chasing the (long) overdue duel-gelt whilst I faffed around not knowing what to make for it.  I've also left the base unhighlighted as despite zooming in on Greg's Horus Heresy bases, I couldn't find a brown in my paint collection to match so figured Greg could highlight and add some tufts to make him fit in better with the forces he'll be fighting alongside.
Posted by JamieM

Nicely done and well thought out, good to see that you don't just faff around with Tea making :)

This is just GREAT! And it has an added bonus - I now need to paint some Salamander infantry to accompany this chap - and potentially source a Thunderhawk that they escaped in...?