A little project for the BFG

Several months ago the BFG asked me to convert a poor Landraider into an orky battle wagon.

I am not sure of the origin of said vehicle, but the previous owner had painted it with a roller and the paint was so thick in places it looked like the plastic had been melted. In addition the previous owner had already attempted an orky conversion and it was, well without wishing to sound rude, of the standard that you would expect if you gave an infinite number of chimpanzees an infinite amount of glue, plastic bits and paint and asked them to make a model to display in the Tate Modern.


I started off by taking a pair of pliers, a hammer and a dremmel to various bits of plastic, areas of paint and puddles of glue in attempt to revert the landraider to its former shape. I then raided my bits box and plasticard store to design a new layout. The stumbling block at this stage was the Deffrolla - pardon - I said to the BFG - a deffrolla he said. Now some of these you see on models are naff extraordinaire, so I wanted to find something good. Over the coming months one eye was on the lookout for a suitable bit. I searched charity shops, toy shops, adult shops :) and a variety of other places - all to no avail. Imagine my surprise, as well as a thought that I should have looked here to begin with, when in Pets at Home I found the perfect thing! It was a dog toy shaped like a dumb-bell. After about an hour of cutting the rubber (that is not a euphemism Eddie), I finally had my deffrolla. A bit of dowel and some more plasticard later, it was done.

All that was left was to sort out, was the two side sponsons. To be honest I was not happy with the one I did on the left side of the vehicle (too square) so on the right side I just put on a spare looter, I mean it fits with the fluff.


So after all that waffle I know you are keen to see it, as always the pic does not do it justice but here it is!! Also there are numerous odds and ends over this to reflect the normal rag tag orky effect. The BFG has said he will undercoat and paint it, so the effect in the pic is still somewhat half done. 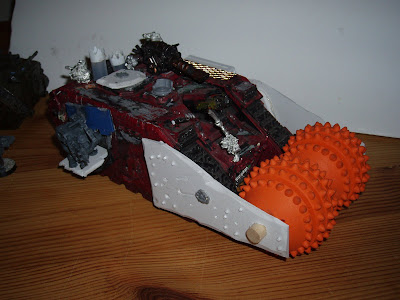 Me likey. Just the right kind of looted and then cobbled together from all the spare bits lying around look that Meks go for.

It's big, bold and scary: and that's just the rolla!

Mate that looks awesome, can't wait to get my hands on it!!!!