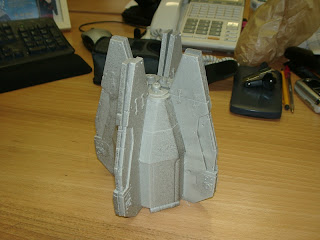 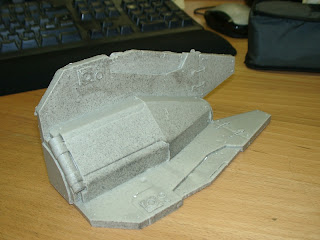 I Tried to resist but…….

….I succumbed to the urge to make and mould.

A few months ago I had a conversation with Varistat about drop-pods.

To summarise the conversation: Wouldn’t it be great to have lots of drop pods.

This idea never left me. They never do sadly. They just swim around in the void behind my eyes and then randomly force their way back into my consciousness.

I spent this weekend making a master to be moulded. I decided to ape the style of the GW drop-pod but went for a quartering rather than the five sided look of the GW ones. The main reason for this being that it would be easier to fit the bleeders together after casting.

Sunday I poured the mould and skipped home on Monday full of glee to find the mould had worked pretty well. Sadly, however, my hopes that the 5mm top vanes would survive extraction from the mould were dashed.

Plan B. Trip to Alec Tiranti to buy casting resin & filler to reduce the amount of resin needed. Tuesday night – four successful casts. Clearly they still need flash removing and some work to tidy certain details but generally I think it has come out fairly well.

I think they should look pretty pucker in the Griffins colours!!
Posted by JamieM

There I was last night trying to work out the best way to re-do my Flesh Tearers and make them fun. I know, says I, how about lots of drop pods? If only there was a magical place to get them I thought.... and now I can't stop smiling!! Me want :-)
So what other top secret projects are you working on Eddy????

LOL - Secret project?? If I told you that I'd have to kill you!

This project hasn't been 100% successful. These pods will take a fair bit of tiding up and are not, in my opinion, particulary cheap.

Sadly, if I had waited a week, the brainwave I had last night would have meant that 10 drop-pods would have cost around £30 quid instead of the £10 that each of these is coming in at.

Next time we meet it might be worth talking about a new drop-pod project which could mean that if three or more people come in on the project we could get the cost of drop-pod down to about £20 quid for ten pods.

Oh yes!! That indeed would mean pods for £2.00 of your shiny new English pounds!!