Well after much thought about this months plan, I decided to take a break from assembling and painting trukks. I have the deffkoptas assembled, but I thought that if I wanted the army to remain competitive as the points raise, I needed to start my Nob bikers. I searched through my stack of Orky bits and located 4 more bikes to assemble.


I worked out that in order to get the best from them I needed to build a Painboy to go with them. I then made an elementary schoolboy error in so far that I assembled the bike and then went to the Ork spearhead to get the painboy... only to find that the spearhead does not contain any painboys. I therefore decided to stick with a normal nob sized ork and pick him out as a painboy by painting his bike white with a couple of red crosses on it. Of course he has his faithful gort orderly 'Samantha' following him around on a push bike to further enhance his battlefield cred. I had a bike which the BFG had found at warfare before chrimbo, so after searching through my box of grots I found one with a suitable set of legs to use, but I replaced his hand with something more in keeping! 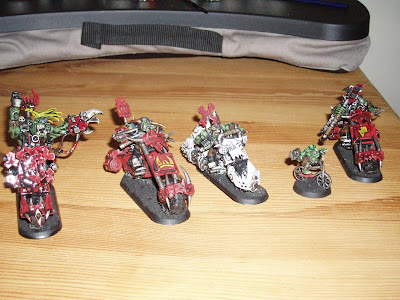 And yes before you ask, that is the Warboss from Black Reach (around) cut onto a bike. With the chopped forks and the old Nob Banner on the front it looks awesome and would actually have made a decent Wazdakka. The slight shiny look is due to the wash still being a touch moist!!.


To differeniate between the nobs and normal bikers, I decided to 'chop' the front forks. I purchased some suitable plastic rod from my local model/craft shop and the process went well as I hope you can see from the pics. So 260 pts of Nobs all done. For the final army there will be two more of these gentle folk, but they will follow another month. 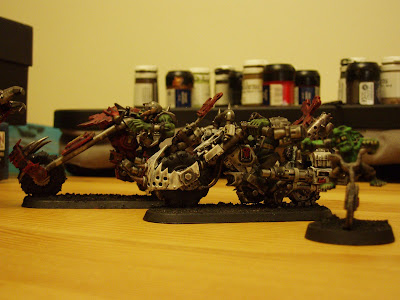 To be honest I have now assembled 15 of these bikes and I getting quite good at it, I wish the same could be said of the trukks, I am still waiting for the BFG to start his.


Next Month, deffkoptas and 2 more Nobs. Onwards and upwards, although what to do with the extra 250 is a bit of a challenge especially as I have used all 6 troop choices.
Posted by Silverback

Particulary the one on the push bike!!