vourite gaming pastime, 40K, along with my ol' chum Andy "The Bear" Powell. I have been to this tournie for the last 3 years and as I have said each and every time, it has to be the best I have been to...that includes Lenton! The terrain is second to none, the scenarios and referee interaction is spot on....anyway enough about this....on to the armies and games!

First up was Chris from Cardiff, I have seen Chris here and the Cardiff events before and he's a larger than life character and embodies the spirit of the hobby! Even if he is a little carried away with the exuberance of just how well he's doing! Well it's true Chris! ;-) 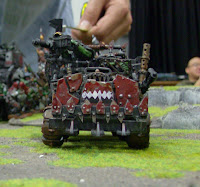 Suffice to say that with Dawn of War and Annihiltion, I didn't want to lose the first turn, great I got to choose deployment....oh bollox, Chris seized the initiative!! So the first turn saw the battlewagon and trukks charge across the table pile out and kick seven bails of hay out of my marines!! Good game with some great moments, shawn the sheep has a lot to answer for!!!
Loss for me 9 to 3 on KP's

Second was a game against one of the ref's Andrew Tailor, what a treat this was, he is a really astute guy when it comes to the game and I was expecting a shoeing!! "Nope" he said, "I wanted to take a really average army" out came his Grey Knight army....being an old Grey Knight player myself I realise they have been left way behind with the 5th edition of the rules, so was hopeful of a win!!

Two large Knight units each with 2 Psycannons, a unit of Terminators with 3 Psycannons in the unit including the masters and 2 Dreadnoughts, left me a little nervous, this was a Cleanse mission using Spearhead deployment and thats a lot of fire power to be moving towards!

Flamer Marine was ordered forward into the charging Dreadnought with the Power Fist.....MUMMY!!! 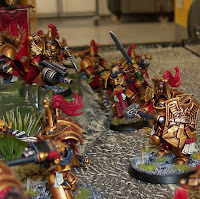 The Grand Master of the Grey Knights strode forward with his retinue.

A really well converted and painted army, this was a really great part of my day. The best part of the game was spent by Andrew teling me how he achieved some of the effects and as is typical of people that have a God given talent, he was very under played about the whole thing!

The amusing part of the game for us was the fact that I poured so much fire into the accursed HQ and Andrew kept saving them, that they were making good ground across the table toward the quarter I was hiding in! Andrew had captured the other quarter on my side of the table, so my reserve rhino and squad were going to have to deal with this, while the other Marine squad tried to stop the remaining Knight squad capturing the quarter opposite my deployment.

The one scary thing for these marines was the bloody Terminators.....ah ha don't worry the

Demon Prince will deal with them, he launched forward toward the charging dreadnought, only to get taken by surprise when my Obliterators destroyed it! Ahhhh now I am in the open!! That's okay, I will run and use the hulk of the Dread for cover...anyhoo 3 failed saves later he was bleeding warp shite like you wouldn't believe! The Grey Knight squad then got a last round of fire in just as the Terminators were lining up to finish him off in close combat! He went down like he'd been pole axed! Great I get another round of firing at the Termies and the Greater Demon has turned up! Where I didn't miss Andrew saved them! Bollox! Okay the Greater Demon will have to rely on his 4+ invulnerable! What do you mean he can't make a single save....another pole-axed monster!! Much to the furstration of the Terminators!
Great game with ANdrew finally pointing out the error of my ways in my moving my Plague marines out of my quarter to claim the adjacent quarter and suggesting a draw! Thank you Sir!
So a draw for the second game...not too shoddy!
Game three was up against Alan, sorry Al I didn't get your second name! This was

another Chaos Marine army with a strong Slaanesh influence, 2 DP's with lash and 6 Oblit's khorne marines in a LR' and two squads of Marines in rhinos. 1 being plague marines! I hadn't played against a configration like this before although obviously I had heard about them. 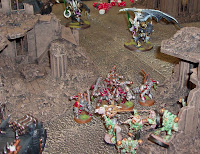 The mission was recon with a pitched battle deployment, so I needed to get my Rhino across the table and into Alan's deployment zone, everything was foot slogging it's way across the table.
I got embroiled in a right ol' duff up in the centre of the table, with my DP and GD piling in with the Chaos Lord, Plague marines and a squad of Black Legionaires...the lash did for me though, pulling my squads here and there! It didn't help that when my lord and the Black Legion charged the Berzerkers I killed only two from over 30 attacks, then lost 4 marines myself...9 on the Ld roll...bugger! Oh no hang on "Chaos Glory" rolls an 11.....mmmm...double bugger! Roll to break off...."1". I'll get my coat! Oh hang on the GD has trned up and can assault the turn he comes forth! 6 attacks on 3's......what do you mean he's missed!! Shit! Ow he's now dead as well! Curse my saving throws! My remaining troop choice was then lashed closer to the demons, then lashed again into t line directly away from the target...this mean't that I would only get 60% of my squad into the resulting assault! They died!!!! This left me somewhat jaded I must admit....oh well back to the drawing board! There's always tomorrow!
I lost this, with Alan succeeding in getting 2 troop choices into my deployment zone.
Sunday morning, well rested, bright eyed and bushy tailed!
First game was up against Tim Bland and his Blood Angels, Tim is from the Exeter Inquisitors and I enjoyed this game immensely, the mission was Spearhead with Capture and Control

Tim was taken a little by surprise initially as my reserves came on from my entire board edge, he'd forgotten about that, probably due to the "Cleanse" mission the day before, the opening part of the game saw me take out the Vindicator and blow the arm off of the Dreadnought, the 5 man combat squad nearest my deployment line dies to the Plague Marines, while the other half of this combat tema gt embroiled in an assault with my other Chaos Marine squad, the GD and the Devastator squad, along with the fist less Dread....ultimatley I won this and managed to make my way over the table and was 6" away from his objective when the game ended on turn 5! Tim had awful luck with his 2 terminator squads, 1 not turning up until turn 5 and both scattering 11" and 12" respectively when they struck on to the table! The first dying to 4 Plasma cannon shots killing all of them!

Due to the initial mix up with Cleanse and Spearhead, I thought I had done enough and another draw was lined up!! "Errrr no" Tim said, "I hold my objective with this remaining

troop choice, and you.....errr have nothing on yours....a win to me I think.." he said somewhat sheepishly!! Oh Pooh....how stoopid!
So another loss!! I scored lots more points as well!! Boooo Hooooo!!
The last game was against a young man from the other Bristol club I believe "Big 'Uns", Matt.
Imperial Guard with ratlings, Ogryns...I like Ogryn...(I think I have said this before!) a Vendetta and Valkyrie, a couple of chimera conversions, as Humvees and a Leman Russ!!
The mission is Pitched Battle and Seize Ground, 4 objectives placed. Lovely army as well with some 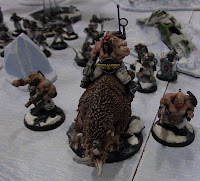 The game was a real blast, with lots of moments worth note, the most laughable one being my DP running into cover and the ensuing discussion over cover meaning that one side was exposed and yes the Vendetta could move over to this side and shoot him with it's Lascannons...which it duly did, then lots of laughs about how I might roll "1" when I leapt out of the wood!! You can guess what I rolled! That and the plague marines that moved out of their cover to negate the threat of the Ogryn, only for me to forget that Plasma guns are rapid fire weapons, even though I fired them twice and the other marines only fired their pistols, to make sure I could

assault them....oh hang on they are rpid fore aren't they!! Maybe I should have stayed in the cover! As luck would have it, they assaulted me and I won the ensuing combat consolidating back into the cover and my objective.
The result was 3 objectives to none to me! Great game and a fantastic opponent, thank you Matt.
I will be posting the best painted armies in a future post.
So keep tuned in!
BFG
Posted by BFG

Ah children, are you all sitting comfortably? Now what can we see through the Arched window today... holy sweet mother of Dumpty, what in the name of all things Hamble is that, children don't look..

Great tournament report as always - some lovely armies that you faced off against! The Guard look great and those grey Knight terminators - well, what can you say.

Very good show sir, always good to see how you get on at tournaments.