It all started last Saturday. Twas a lovely day. Sun was shining and I was on my way down South to have a couple of games of 40K against the Silverback. A splendid way to spend a Saturday...

... so whilst Evil Monkey was let loose on "Left for Dead 2" we prepared to see if Shrike and his friends could stand up against the Fatecrusher list. The answer is no. The first battle we managed a draw although that was more thanks to the never ending scenario and my Land Speeders than it was any skill on Shrike's part.

The second game ended 4-1 on obj to the Daemons. End of Turn 5 we had a draw but it was not to be this time. So this got me thinking: why am I always playing for the draw? Why isn't the army hard enough to make the Daemons play for the draw?

2 Hard hitting units. 30 marines in vehicles behind them and skimmers bouncing around. So during the drive home whilst Evil monkey slept and dreamt of zombies I considered what was lacking.

Shrike - he's good, not game breaking and gives Fleet. Does tend to run away: can make him fearless by adding a Chaplain but, erm, no. Pass
Chaplain - gives fearless to Assault Termies but can be insta-killed and is weak. Fail
Assault Termies - fabulous unit. hard hitting and with fleet they are scary. Pass
Marines - 30 is a good number: gives me 6 scoring units. Power Fist, Meltaguns in Razors are excellent. Missile Launcher and Larry Lascannon are good. Plasma Cannon is pants. Misses too often. Pass in general; Fail on plasma cannon
Assault Marines - good unit with Shrike. Infiltrating or Outflank are cool. Bit weak at times when they hit but Thunder Hammer is good fun. Plasma Pistols are rubbish. Invariably 1 overheats and most of the time they don't even get to fire them. Pass in general; Fail on plasma pistols
Land Speeders - oh dear. Ideally I like units to have a job: these boys can't decide if they're light vehicle killers or infantry killers. They also have to move only 6" in order to use both guns. Not good - I want them zinging around and offering a bigger threat radius. Very good, however, at last minute land grabs. Pass for missions; Fail for job well done
Land Raider Crusader - love this. Drops off Termies and then proceeds to annoy the heck out of everyone. Pass

I decided that I needed another hard hitting unit that can appear in the enemy deployment zone on turn 1 alongside Assault Termies in LRC and Shrike + Assault Marines. To get this unit I needed 170 points.... so how do you get 170 points without losing any units?

Like this....
Remove Chaplain and replace with Chaplain Cassius. He's Toughness 6. 6!! He gives me everything the other one does and more. Ok he's only power armour but then most attacks against him are power weapons so that's no issue. He's also 5 points cheaper. 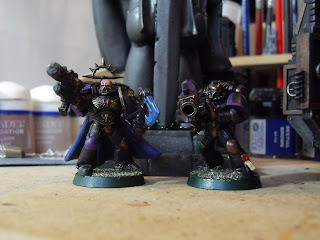 Cassius is made up of Space Marine Commander and Space Wolf bits.

Drop 1 Assault Termie. 5 or 6 in the unit are neither here nor there. So lose one with LClaws. 40 points saved. 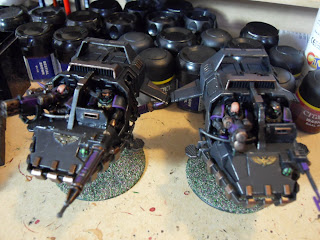 One on the left is an old one handed to me during an exchange with the Silverback years ago. One on the right is a new one and boy do they go together much better now they've been remoulded? Yes. They do! Multi-Meltas give me a 36" threat radius. Tank Hunters or Monstrous Creature killers.

So that's 176 points saved. So now I can introduce my brand new Ironclad Dreadnought in a Drop Pod. Yummy. 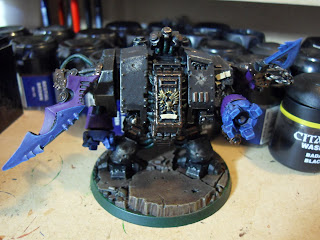 Yes that is a Furioso Dread with Warmachine bits attached. He wasn't being used anymore so a quick repaint and he's ready for action. 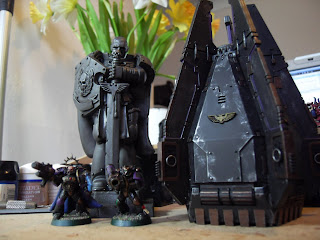 Drop Pod stolen from the Space Wolf battleforce; have to replace that one day! Nice Statue? Big ain't it?? Statue is work in progress.

All the above added in 5 days since I started this on Monday. Spiffing. Now let's see how they deal with nasty stuff!
Posted by Von

Like all your changes Nick - certainly seem very sensible. Will the assault squad miss those extra attacks? Possibly, but then the rest of the upgrades look very useful so well worth a try!

Wow, good job mate. I particularly like the combination of Warmachine and the Dreadnought.
Good job all round!

I have to say that it sounds like you have been unlucky with the plasma cannon. Did quite well and for only 5pts on the normal squad value I thought it was points well spent.

Probably more so in my shooty marine army than your chargy-chargy-kill-kill shrike army.