Abaddon... but with a twist. 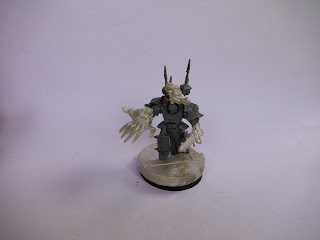 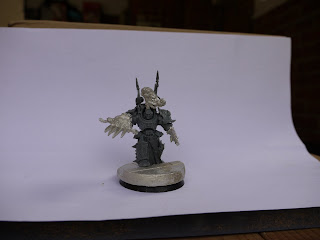 Well, third post in three days - which tends to pretty much be the way I work to be honest!
Ok, so, from my post below you'll have seen that I made up 7 terminators from the AoBR termies, plus some bits I scavenged plus some parts from the Chaos terminator Lord....
....So you're probably wondering what happened to the chaos lord, right?
Piccies at the top, as I turned him into Abaddon the Despoiler!
Now, I love the Jes Goodwin sculpt of Abaddon. As with all of Jes's stuff, it's top quality and bursting with character. He used to even be a little bigger than the old metal terminators, which is absolutely right and proper in my eyes. Then GW brought out the spiffing new plastic terminators, which were a little larger and suddenly Abaddon was somewhat on the puny side.
I'd bought the Abaddon figure ages ago and turned him into a lightning-claw-wielding champion of a slaaneshi terminator unit. So I ended up with the talon of Horus, Abaddon's head and his daemon weapon in my bits box. With the lovely new plastic termi lord, I'd have been made not to put the two together, right?
So, I started with a rather nice display base I'd picked up from Heresy miniatures a good while ago that matched the flagstones of my chaos army and had a step to allow abaddon to stand out. Some pinning of the legs allowed him to just be stepping up to the top step. I then chopped down two chaos terminator arms to take the talon and daemon weapon and stuck them in appropriate poses. I was intending to use the original head, but it felt a little small on the new plastic model, so I used the rather spiffing bare head from the lord box (I like the expression a lot) and just pinned abddon's top knot to it instead.
The termies in the post below will now be Black legion ones to form their Lord's bodyguard and hey presto, a whole load of terminators! Quite how I'll fit them in a carry case is a little beyond me right now, but that's a problem for another day :)
Posted by JamieM

Mate that looks lovely. Hard to improve on a good model, but you have.

Mind you, I can't see any baby vomit on it?

Abaddon and friends.....this is gonna hurt!

Only a 3+ save till they are painted Urn!

lol - given my past performance with chaos termies, that'll be for the next 3 years or so!