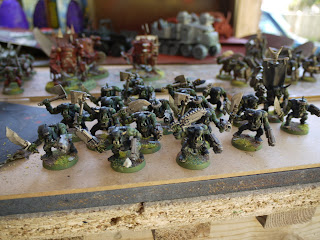 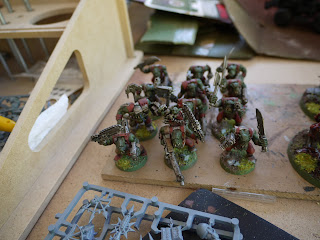 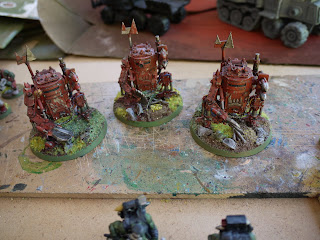 ...So I'd better make it a good 'un, right?
Ok, so whilst my hobby time has been rather cut down by the birth of my daughter (my best miniature yet, even if I do say so myself!), I did manage to get started on my Ork army right before she was born.
"What Ork army?" I hear you cry "I thought you'd decided not to start new armies because they take too much time and you have enough already!"
Yes, i did indeed say all that. But in my defense, I am a wargamer and am therefore totally incapable of resisting anything even vaguely shiny. Even if it's plastic, and that stuff don't shone much.....
Anyhoo - here are the fruits of my early labour. I decided that as I was intending to pile into combat a lot (yippee!) I should try to make the units easily distinguishable. The Ork Clan regime was my saviour here as I decided each mob would come from a different clan. Different colour schemes weren't quite enough, so I made sure that the headgear on the first three units was also different, so top-knots for snake-bites, bare heads for evil suns and helmets for goffs (I also added some little goblin shields to the snake-bites to emphasis their clan and these were small enough to be bucklers as opposed to full on medieval shields). Spray them the appropriate colour, add some Knarloc Green and metal and a couple of other colours and there they were! 12 each of the snake bites and evil suns for Trukk mobs and 20 goffs for a battlewagon mob, or the start of a 30 man walking mob.
For support I changed the arms on three old-school killer kans as the triple joints looked a bit rubbish imo. So, one joint less was more in my eyes and after covering the "shoulder" with orky bits to hide the new join, they only needed a quick red spray and metal and bits and power cables picked out and they were ready to go!
Hopefully coming soon are my chaos termies and then onto more Orks - gotta love 'em :)
Posted by JamieM

Very nice indeed, the clan system of squads is a good one for different squads.

Love the battle damage on the kans as well. Also the sublte 3 to 2 joint conversion works well.

Mind you, that is still a lot of orks on the way to us soon. When I say soon I mean 6 months.

I have however decided to interpret the mass posting of fresh figures as a sign that poor Mrs Urn is probably doing all of the new baby related work!

Tee Hee! The inner ork in me said I should try to create some mischief!

Actually not too far from the truth ;)

The Orks were finished the morning the contractions started, but the termies have all been done since!

I love the look of the Orks Urn, the Kans are really cool too, why the narrow mounts for the Klaws?