I'll dispense with my traditional "Gosh, hasn't it been a long time since I posted on this blog" because it's always been a long time, so I should probably get used to it :)

Anyway, what I've been up to recently is painting lots and lots of 28mm Roman Legionaries from Warlord. Really nice figures, just right for batch painting. However, this post isn't about the 79 legionaries that I've painted.... Why not? well, two reasons. The first is that I haven't textured their bases and the second is that they're all packed away and it would mean getting them all back out again to photograph!

I have 20 more Romans to do t0 complete the 6 units, so I'll probably base and photograph them all then to prove that I've not been doing nothing ;)

Anyway, taking a break from the Romans I got my Saga warband painted up. 25 blokes, all batch painted again with coloured undercoat to make life slightly simpler for myself. You'll notice that some are still awaiting shields (they have blank shields), but they were dispatched today from little big men studios, so I'll finish them off as soon as they arrive. 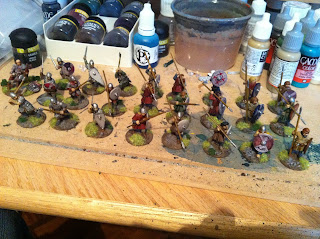 So, what's up next? Well, after batch painting 104 figures between Romans and Saga, I decided I needed a break and to spend some time on some individual figures instead, so shown below are the next figures to make it to the magic table of painting+1.... 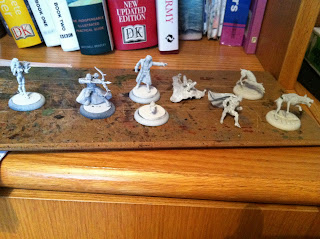 6 Pulp City figures and 2 more Malifaux figures on the right (I'm also working on 3 Fire Gamin, but my plan to get them done quickly is scuppered by the fact my orange ink has all set!).
All of these figures will be painted and get some serious highlighting too as the super-hero figures practically demand it. I should probably then turn my attention to finishing the Pulp City scenery so we can get some more games in!
Posted by JamieM

Just found this blog and I have to say, its very impressive.

Already looking forward to seeing how those Pulp minis turn out

Cheers Hendy! We're not the most regular of posters and posts tend to come in like London buses, but hopefully they are eclectic enough for people to find something interesting.

I think pulp is due for it's day very soon. We hares off and bought loads of figures (and then bought some more) and have only had a couple of tester games. The city scenery is nearly ready and so I suspect pulp city will get some retention soon.

Good work on your blog by the way, it's one of the ones I lurk around and the pulp posts are great!

Looking forward to seeing what you are working on next.

Thanks, I try and keep it interesting.
There will be alsorts on there soon though. My minis and scenery, PC at conventions, battle reports and loads more