If you remember I am in the middle of trying to paint up 6000 points of World Eaters for March 2013; assuming the Mayans got it wrong obviously...

The original army list I had was just over 6000 and included everything I owned for this army. After a few games that list has, of course, completely changed and now if I was to paint everything I own I'd have over 7000 points. Eek.

Last week was a holiday week so I was able to concentrate on the army for a good few hours every day.

Here's the first model completed in that time: say hello to the Maulerfiend with Lash Tendrils (cos they look cool!) 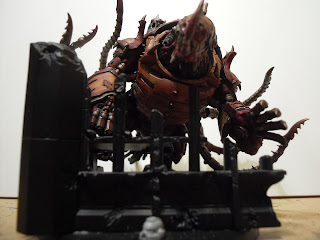 You will note he seems to be crawling over a ruin and you'd be correct. He has a special rule called Siege Crawler which means he can move 12" and ignore difficult terrain so rather than plant him on a bare base I decided to get a little more creative. 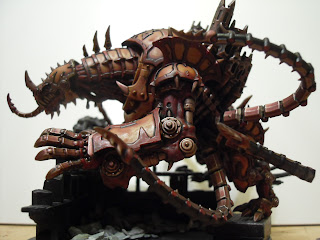 Still a fair bit of work to complete the base and currently he's just balancing for effect. The intention is to use magnets so he can be transported more easily and to help out should I meet any unscrupulous players who decide that TLOS means they can see him on his elevated base. 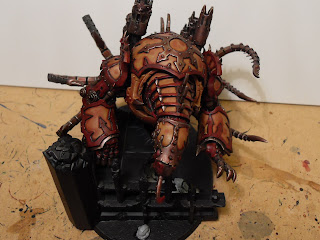 He was a lot of fun to paint although if you do build one I'd advise leaving the engine chimneys and shoulder pads off to paint separately. Mine eats Grots apparently but dislikes Obliterators.

He was so much fun to do that I opted to add his cousin to the army even though I didn't have the model until Thursday last week! Say hello to the Forgefiend with Hades Autocannons. 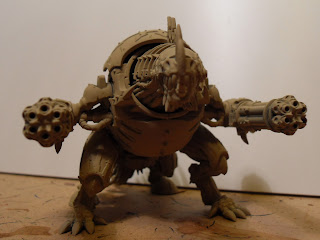 What else have I added then? Well you saw the Aegis Line previously although I should probably get some more pictures of the completed version.

The main additions this week have been another 10 Combat Cultists who are now built and undercoated so that I can have a squad of 20 marching up the board with Kharn. I've also treated myself to a Decimator Daemon Engine from Forgeworld who no doubt will get some pictures eventually.

One thing I'm finding with 6th Edition is that large blobs of Infantry are the kings of objectives; hence the Cultists. However, I'm now changing the army to include 2 x 16 Khorne Berzerker units to see how they do. One item that just has to be added is the Icon of Wrath! The ability to re-roll my charge range with these large squads is absolutely vital. I got hold of the Banners of Rage from GW and two of them were completed today. 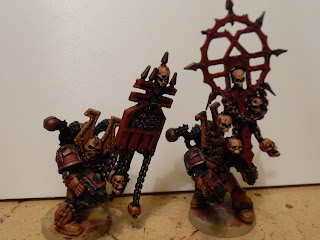 So what else have I added then? 10 Chaos Space Marines with Icon of Vengeance, Heavy Bolter and Plasma Gun were also built, undercoated and basecoated in the lovely Humbrol Desert Yellow. These boys are Troops and can man the Aegis Line or Bastion. With the Icon of Vengeance they are Fearless. So now I have a Troop unit that will stand still to operate a Skyfire gun and hopefully capture objectives.

Normally I'd add a Power Fist to any unit but with this army I'm now moving away from that idea. Why you ask? Champion of Chaos rule. Essentially whenever we get into combat (we're Khorne so it's going to happen right?) any Chaos Champion has to either Issue a Challenge or Accept a Challenge: they have no choice.

A Power Fist is great but in a challenge you're going at initiative 1 and probably dying. I want to keep these boys alive or at least give them a fighting chance so I'm re-thinking Power Weapons and/or Lightning Claws.

So here's the Champion for the new Chaos Space Marine squad. Yes he has 2 Bloodletter arms as the Hellblade sword is gorgeous. 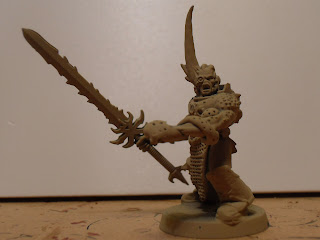 And as that worked I've now set about creating 2 new Berzerker Champions for the large 16 man units both armed with Power Weapons. The first one below uses a Power Sword from the new Chaos Raptor boxset as I'm going to build mine as Warp Talons I had this weapon spare. 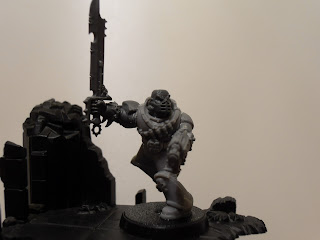 The other one is actually going to be armed with 2 Power Swords for that extra attack because, well, because he can. He also has a Hellblade and a standard CSM power sword. He costs 5 points more than having a Power Fist but as Champion number 1 above is 10 points less than with a Power Fist it still fits the army list. And 2 Power Swords is cool right?? 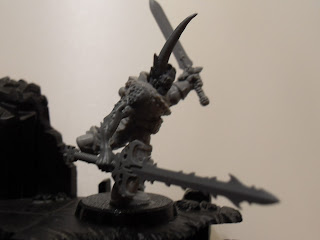 My current total painted has now crossed the 4000 point mark! I will post the new list and what's done next time but for now I need a rest so back to work Monday and take stock again tomorrow evening.

What next for the painting table? Haven't a clue!

Wow you have been a busy boy! Those look great and I love the champions and the forge fiend from forge world

I was just going to chuck 6K points down and start throwing dice!

Looking good! Nice use
Of the hell blades to tie in the khorne thing and that really is a lot of blood crazed loonies running around...!