Sounds menacing doesn't he. Well in Massive Darkness he bloody well is. Game 45 was a special mission to grab dynamite, lure the bad boss to a subterranean bridge and blow it up to send him plunging into the Abyss.

This was a tricky one. Which is why Game 45 was short lived and a failure. We messed about too long and before we knew it the Immoral, the unstoppable target of our plans, had passed the point where he could be drawn to his death. 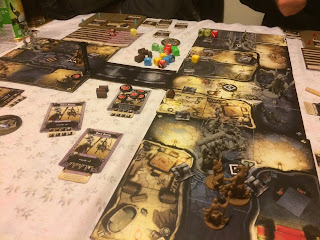 This time we didn't hang about......no actually we bibbled a bit on this one as well and then happened to notice that the rouge had placed themselves well for a run on the bridge and had the fireworks to lure the bad guy!

Once we cottoned on to what was possible it was an easy matter for the Rogue to tease the horrid ogre onto the ancient stone walkway before using a magic spear to destroy the supports and dispatch the Darkness's lieutenant to its doom!

Fun mission and nicely different to the others we've played so far.