Letting myself get distracted.

With only a few weeks to go for the painting deadline I should have my nose to the grind stone getting the last figures painted for myself impose challenge. 60 still to do so what do I do?

Something else completely different of course!

Being so close to the finish line my mind has wandered off into 2018 with a view to setting some goals for next year. Yes yes I know I haven’t finished this year but it’s just how my mind works!

Sat around my study over the last few years has been the collection of Dystopian Legions (DL) stuff that I purchased ooooh sooo long ago. I’ve always been interested in the Victorian Sci-Fi but never really got to have a crack at it gaming wise. I even had a copy of Space 1889 but never played. That desire is what lead to all the purchases of DL and also the 6mm Dystopian Wars (DW) stuff. It had been niggling at me that nothing had come of these so I became resolved to do something about it. Well that was over a year ago and still nothing happened. Well apart from Junt and I conning Urn to buy loads of stuff for it as well.

We had come to a consensus that it would be fun to take DL to Mars. I suspect that this may have been driven by me but I will deny it if so accused. However that notion stuck, germinated and started to grow. First it stemmed into the idea of a couple of funky Aeronef flyers to supplement the land forces we already had and then, like so many of the notions in my head, it got out of hand.

Long story short …..Aeronef started getting designed. Then I balked at scratch-building all these ideas. Then it occurred to me that they might be good in MDF. Looking around there are a few people making Aeronef but they weren’t what I was looking for or were too big. So I resolved to contact a manufacturer to see if some could be made. I had to good fortune to choose Blotz as my first port of call and I am very pleased that I did. Since the early contact the idea was well received and handled in a stress-less manner. So in just a short time the first two designs from the project have gone from concept sketches to scale drawings and onto being finished things. I have to say it has been fun! Slightly surreal getting your own design through the post as a kit to put together but fun none the less!

The first two were the Kingdom of Britainnia ones primarily because they were the simplest designs on which I could get some idea of how to proceed with the drawings that Blotz would need. I will admit to being quite pleased with how they have turned out.

A Patrol boat for HM’s forces….. 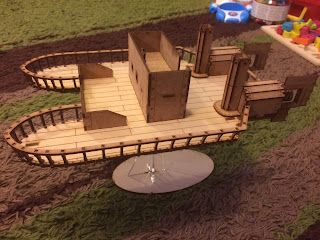 …..and a light launch to ferry troops around. 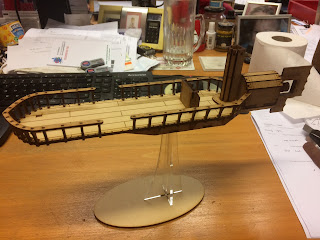 As this had come from the DL perspective I’d intended the large ones to be ‘sky tanks’ and the smaller ones to be ‘Sky APCs’. I suspect however that the DL rules will be thrown out of the window, due to them being poorly received, and a new rule set will be found which will give the Aeronef a life of their own.

Given that we have five DL factions between the three of us that have DL, then ten designs are required in total. The first two are finished, the next is now with Blotz and the fourth will be pinged over shortly. I’ve been scribbling away on new design ideas trying to make each new one markedly different from the others which is a fun challenge.

I keep having to rein myself in with the practical limitations of size. I doubt the Long Haired General at home really wants a house full of massive sky ships. Shame. I’d love it. ;-)

If you like them then head over to Blotz where they are available to buy or keep an eye out for the new ones in future.