Adding the extra little detail markings to the US Nefs has spurred me onto doing the Brit ones as well. I'd always thought they were lacking but had struggled to be inspired with ideas for what I could add. Whilst searching for the US ones I saw World War One aircraft markings and that is where I drew the inspiration for the tail details for theirs.

So I started in the same place for the Brit ones and wasn't disappointed. So using the tracing paper approach I ended up putting roundels and identity letters onto all three British Nefs. The tail colours have ended up being quite 'tricolour' but hey it still looks a load better than the plain colours in my opinion.

I also added the funnel colours which make a big difference. 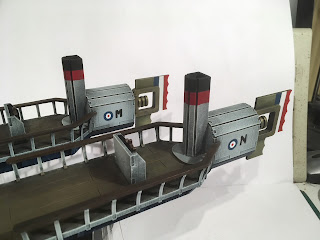 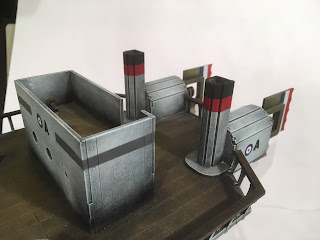 This is another three finished this year so:

Thankfully I'm not anticipating buying much else other than the next two Nef when they are finished so getting some more done should put me well into a net negative number. It would be nice to get to -365 but this might be a tall order depending on the occasional bouts of weakness that result in naughty internet purchases.

Those decals really do the business to dress them up and make them "real".

I shall have to do some on mine when I get them!