And the man at the back said "Everyone attack!".... 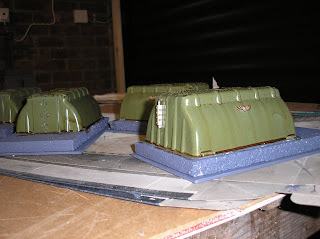 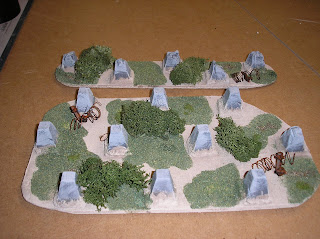 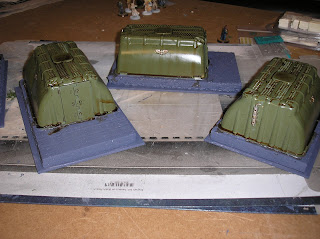 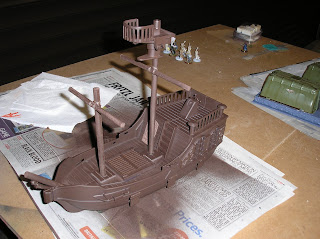 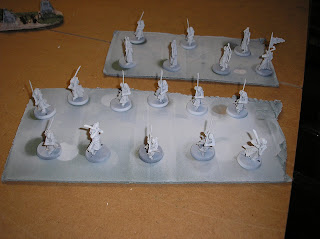 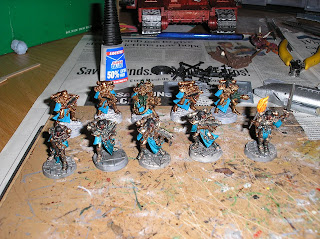 ...And it turned into a Hobby Blitz...... A HOBBY BLITZ!
Right, on that rather dodgy song link I thought I'd post about the weekend I've just had and all the hobbying (is that a verb? It is now!) I've done in it. I said a while ago that I should post more about random things, and followed that up by not doing so, so this is an attempt to make amends.....
Recently I've actually been doing almost nothing to do with this slightly geeky hobby of ours other than play. Yes, I've been painting the odd sister squad and rhino for the Blog challenge, but that's been sporadic and half hearted at best for the last couple of months. To be honest, I'd even wondered if I was going off painting little figures I was that disinterested!
But fear not, something snapped on Friday. I don't know what it was..... Perhaps it was the thought of shifting the climactic GOG battles forward to about a month's time..... Perhaps it was the fact that I played a game of 40k last week and realised that every game I played used exactly the same scenery and grass mat, just shifted that scenery around a little each time..... Perhaps it was the fact that I have to spend 15 minutes clearing the garage before every game to even mean we could lay out that scenery.....
But something did snap. And a Hobby Blitz ensued....
I started off by finally finishing the half ar$ed job I'd done on some rather simple tank teeth thingies (you know, the things that stop tanks going over them). All I'd previously done was spray them with roughcoat and stick them to a board which I added sand to. I had only used them once, probably because they looked rubbish. So I added some flock, bushes and rusty old barbed wire to ensure it was clear that they were difficult ground and offered LoS blocking (and were impassable for tanks) and now I can't wait to use them.
Encouraged by this I started some entirely new terrain. For ages now (over a year?) I'd saved some interesting packaging that muffins for my weekend breakfasts came in. "They'll look great as some kind of tent" thought I. Not so when kept in a big cardboard box since then though. So out they came, out came some of the mountain of polystyrene that I've been keeping and some plasticard and voila, Imperial All Environment Survival Posts. The simple addition of doors (spare from rhinos), an Imperium Eagle (again spare from rhinos) and an exhaust fume (from a the first ever rhinos!) finished the modelling. I reasoned that they wouldn't need windows (might not work in the harsher environments) and if time and conditions permitted they would be built on a concrete base (mine were). This meant the building would block LoS or offer cover for vehicles and the concrete would offer saves for infantry. Just need to highlight the concrete and they're done.
Then I started on my last sisters squad. This is the one I need for April's painting. So here they are, stuck together with basecoats on half and basecoats and washes on the other half.
Next up was the pirate ship that's been sitting around getting in the way looking like a toy. Some conversion work on the masts and windows and sticking the thing all together (including adding some new decking, drilling new holes for the masts and adding a door) and then spraying it brown. Highlighting to do and then it'll be ready to challenge Master Shipwright Waple on the Seven Seas.
I even dug out all of the Armoured LotR Elves that I had lying around in anticipation for War of the Ring to work out how many I had. (Enough for 4 bases of eight warriors and 2 bases of eight archers if you're wondering). So I converted up a new banner bearer, cleaned up, based and undercoated all those not yet painted in anticipation of them being painted too.

And I even found time to add two coats of paint to the walls in our bedroom, watch two 6 nations games and the City game on Sky!

Apologies for the long post, but I'm just so chuffed to be back hobbying again! Really enjoyed the weekend and I have a new lease of life. It's good to be back :)
Posted by JamieM

Ah. Oops. Apparently I shouldn't be left in charge of a keyboard. What I meant to say was: Holy VSM, Batman - someone's been a little busy.

Good to have you back VSM!

And is that some LotR High Elves I see?

The only problem with being back is now I keep looking at lots of new toys! There's those Trafalgar ships from Westwind (£65 for two fleets and the rulebook - bargain!), expanding my SoTR force (despite not having played yet!), getting in a BKC force, painting my Epic stuff, getting the LoTR stuff ready to go..... Is there no end?!?!?! If only I had a little willpower ;)

There is no end. Willpower is for wimps. That's my motto anyway... you can never have too many new games!