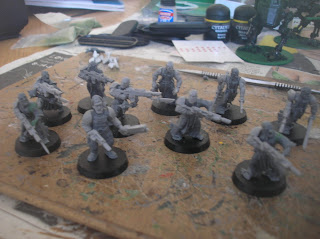 Yep, like the proverbial London buses, none for ages then three come at once!

This one is a little one to show my WIP Penal Legion. i had intended to put the Guard away and work on something else now the tourney is done, but gish darn it, I just can't keep away from the little blighters.... So, over the next few weeks, expect to see some of the more esoteric choices from the codex coming to this webspace as I fill up on the choices that I don't currently have available.

Well, these boys are made from a mixture of Empire Flagellant bodies, heads & arms, catachan heads & arms, cadian arms and the Penal Custodian is made from the body of a Valkyrie door-gunner and arms from a cadian (head form the vehicle sprue). Expect to see them flinging themselves into danger in the hopes of earning the emperor's mercy on a tabletop near you once painted.

Okay, now these are nice reminding me of Schaeffers last chancers if I am honest!
Good job mate!