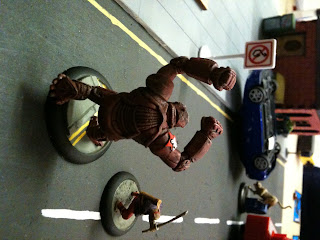 I finally managed to get a game in Pulp City! I’ve wanted to play this for an absolute age!


We decided on a small clash as I didn’t have a Scooby about the rules (nothing new) and decided on Howler, Chimp Chi and Apebot as my Team up. Urn had Tritonious, stalker and a sun power spandex ponce called Solar!


We squared of on the high street and quickly closed upon each other. Unable to contain his rage, Apebot hurled his first car at Tritonious which, sadly, fell short. Howler darted about and Chimp Chi scuttled up to a building. The ‘Heroes’ moved forward and Howler found that he had wandered to close to Solar who unleashed the power of the sun at him. Stalker eyed the giant Apebot in an attempt to find a weak spot in the automatons armour. 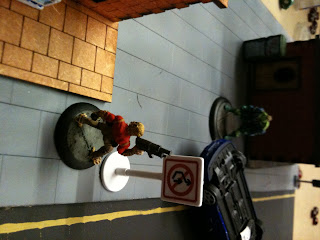 Howler, having learnt his lesion about straying to close to Solar, quickly darted back across the street an attempted to lay down a suppressing fire to halt the advancing enemy. Sadly this brought him near Tritonious who side stepped the wreaked car and blasted Howler. Apebot was starting to get really angry now! A nearby parked Jaguar was launched down the street at Stalker and the exploding vehicle left the poor moggy a bit singed around the edges! 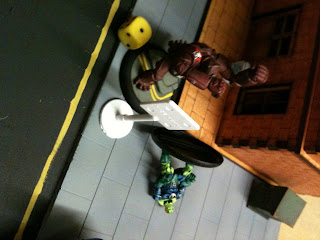 A badly executed attack from Chimp Chi gave Solar the chance to lay the poor super-evolved ape flat out and he was out of the game! The heavily wounded Howler attempted to get away from Tritonious but was zapped at range by Solar. This was all too much for Apebot who thundered up to Tritonious and with a blow from a mighty metal fist Tritonious was hammered through the pavement. Stalker attempted to leap on the powerful constructs back but was caught in a steely fist, knocked cold and flung at the approaching Solar! If the Flying hero hadn’t been knocked from the sky he would have been able to blast the enormous A.R.C member but as he picked himself up the two finally traded blows face to face and an exhausted Solar punched through the armour and ripped the mechanical guts out of the armoured torso. With a judder the Metal monster ground to a halt and the day went to the heroes. 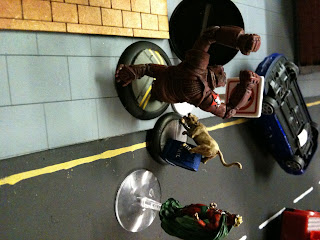 Can’t wait for the next game. Apebot is a monster! KERRRR-POWWWW!

Use him with Virus and Apebot gets even better

He would have squished Solar

Like the two sides to the same game report! :)

I'd like to say we planned to write as two sides but we just both started typing at almost the same and I disn't notice the other post!

Sssssh Urn! It makes us sound dead cool and organised if we make out it was deliberate!

So he shall be wheeled out for the next game ;-)

Ha! The mighty heroes stand ready against the scheming monkeys and monkey robots! Unless, that is, I wheel out some of the other supremes who are painted an haven't seen te tabletop yet - stayed tune for the next issue to find out who turns up :)

Damn you stop making me interested in more games!!!!!!!!!