Rumble in the Streets


Deciding that we really needed to get Pulp City going, Eddie and I faced off with the herioc Solar and his trusty she-lion Stalker were patrolling the streets alongside the half alien Tritonius when they happened upon a trio of dastardly apes causing trouble downtown.

Not thinking of their own safety they piled in to stop the Evil simians from breaching the peace of the streets of Pulp City that they had sworn to defend!

To keep it simple we had a straight fight with no resources and no plots, just a punching fest :)


After a cagey start as we all moved forward Apebot suddenly cucked a massive car at Tritonius but his haf ape, half android mind had miscalculated and it fell short, much to the heroic Tritonius' relief!

Solar then took affront to this attack on his team-mate and, pausing only to  rip a street sign from the ground, he hurled it at the sneaky Howler who was capering in an evil fashion﻿.  His righteous aim was true and the monkey ate signpost :)
Howler then tried to retaliate with a drive by shooting, but Solar was quick to warn stalker who dodged the hail of bullets.  The silly monkey was so keen to cause carnage that he hadn't realised that he'd run right into range of Tritonius who chucked a nearby dumpster at his foe, causing him to eat another piece of street scenery!

Chimp-Cho then performed a cowardly Yie-Ar-Kung-Fu move, hurting Solar but leaving himself ripe for a counter-attack and Solar downed him with a single sun powered punch for his Temerity!

Solar then finished off the greviously wounded Howler before the raging robot Simian Ape-Bot charged into Tritonius and laid him low after chucking a car at Stalker and missing with his rolls.  Outraged at these events, stalker piled in and used his prowl token to good effect, hurting the robot as he capered over the fallen hero.

Alas, Stalker's part in the tale was to come to an end when he was smashed by the vengeful robot and ﻿to add insult to injury thrown at the flying Solar who crashed unceremoniously to the ground!  dragging himself to his feet with an oath to save the poor citizens of Pulp City, Solar pulled himself from under the unconscious body of his friend and used flaming fists to devastate the mindless robot.

Both Supremes were now low on wounds and the first go on the next round would be crucial..... Out-thinking the deranged robot, Solar seized the initiative and gathered all his strength for a Trump re-rolled, power diced super-smash-charge needing to take the robot out before he could retaliate and these were my dice :)
Working out that this did 1 more point of damage than was needed to take down the robot due to an average defensive roll from Eddie, the streets were now safe and a victorious Solar stood in the streets that were littered with thrown cars and destroyed equipment. 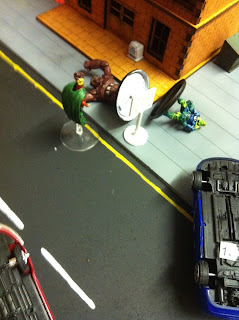 Really good fun and nice and quick to play even with lots of flicking through the rules to work out what we were doing.  Once we work out the basics and get quicker I think we'll fly through games of an evening, which is a definite plus for me.  And in what other game do you get to chuck dumpsters at genetically engineered monkeys?  :)

Sounds like it was a fun game.
Nice looking set up aswell

It's one of the nice things about pulp city in that the terrain is different to anything else we play - took some time to put together, but well worth it!

The Sarissa stuff is great.
There will be more in the range soon aswell

Oooh that sounds like someone knows what is on the up coming release schedule! Do tell!!!!

I had a quicj cjat with Steve from Sarissa at Salute.
There are quite afew designs coming up for the CityBlock range.
The main ones mentioned were gable end windows, pitched roofs and Rooftop stairway doors

I suggested the roof-top stuff last year to the Sarissa crew via email, and they were enthusiastic then, so I do hope we get to see it fairly soon.