Second game in a week! Is the Apocalypse nigh?

So, Dave and I were chatting and we realised that we hadn’t played Flames of War in an absolute age, despite the shiny new rules that Battlefront had recently released. So, without further ado, we arranged a game!


I set up the scenery and it reminded me just how nice a board FoW has when set up. 40k tables are all very well, but the organic nature of FoW boards looking “real” as opposed to 6-8 pieces of terrain dropped on the table was a nice change.


We randomly rolled up “Dust up” a new scenario where we deployed half our force in opposite table quarters, dropped a couple of objectives in those two quarters and had the remainder of the army coming on from reserve at the other side of our long table edge.

Dave got first turn and moved the infantry towards the objective nearest the middle of the table, I fired at him and whittled the unit down over a couple of turns. Given how good commandoes are in CC (they hit on 2s!) I wasn’t intending to go any closer to them. I had also sneakily placed my objective closer to Dave’s side of the board for my reserved tanks and assault guns to charge into later in the game whereas Dave had banked on assaulting through the middle to grab his objective. Which of our cunning plans would succeed…..


Dave’s infantry hunkered down after being shot by the MGs, Henkels and with a small assault by my infantry platoon - I managed to wipe out all of his bases within 10cm of my assaulters in the first turn, thus winning and so this little surgical strike forced Dave back without exposing my platoon to his ‘orrible knives.  I decided discretion was the better part of valour and fell back to the hilltop, 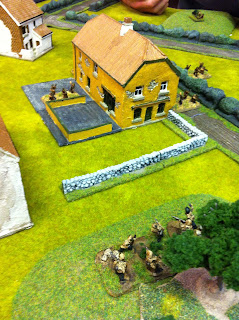 Turn 2 came and3 STuGs raced on the board away from the rest of my force and Dave’s face when he realised that he only had a dug in PIAT team to repel them was priceless! Dave then got his artillery park on and they unlimbered ready for the following turn.


I then managed to get my Panzer 4 platoon on and the STuGs machine guns got lucky hits on the plucky MG defenders and assaulted the PIAT team. Despite bailing out one of the STuGs, the PIAT chap was ground under the tracks of the assault guns….. I now had to keep the commandoes 10cm from the objective for a turn. 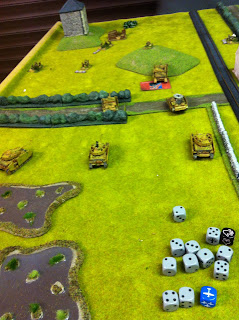 Throwing caution to the wind – the forward commando platoon surged forward as the cavalry arrived for Dave in the shape of a squadron of Shermans and another platoon of commandoes – but would they be in time? 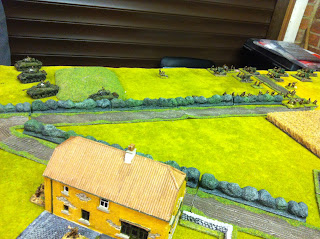 Dave managed to get 2 bases into contact with 2 of mine after desultory defensive fire from my pinned team and he needed 2s to kill…… and rolled a 2 and a 1. The different thing about assaults in FoW is that the losing team, assuming they have bases within 10cm of the attacker, roll a morale check to see if they can counter-attack. Had Dave killed both bases I’d have had no base within 10cm and so would have lost, but I passed my morale check (thanks to the CiC re-roll) so I piled back in and killed two of Dave’s squads. He then passed his morale check, counter-attacked and with two dice rolled…. A 1 and a 4. These commandoes clearly hadn’t sharpened their knives properly.

My counter attack killed the last two squads to finish his platoon, but FoW also makes you test morale at the end of the assault step if you’re under half strength and have lost units in the assault, even if you win the assault. So I promptly failed my test! Fortunately though, my consolidation had taken me back into command with the CiC and his re-roll meant the battered survivors stayed in the fight. Had Dave won that assault (and passed his morale check), he’d have had the objective close and it would have been tight as to whether I’d be able to dig his squads off it quickly enough.

As it was, my tanks destroyed the charging Sherman platoon (double shots when shooting an enemy who moved at the double in their turn) and consolidated their hold on the objective – A German victory!

All in all a really good game and we agreed that it was great to get the FoW figures out again. It’s a nice little ruleset that has just the right mix of realism and good game mechanics for me and the tabletop just looks great with the scenery pieces we have and the figures all painted up. I shall be expecting more games of this to come and Dave’s been muttering about Omaha beach if anyone else is interested…….