As well as wanting extra firepower for the Mega Game I decided that I did not want the Griffons to be a static gun line. The Arty can sit at the back and plug away but I wanted the troops to get stuck in. I just thought the game would be so much more fun that way. The troops needed transport and not some smelly old Rhinos!

Now I had made some drop pods in the past but I'm don't really like them that much these days as they are massive and feel clunky, chunky and basic. As this is the case I started musing, back in November, about how to make some more. It struck my that I wanted to have enough detail so that they were unmistakeable but not so much that making them would be a lot of work. With that in mind I started trawling the net for interest ways to make them and bits and bobs to decorate them with. Whilst in good'ol Ebay I found a parts seller shifting whole Drop pod doors for £1 a piece and it struck me then that the doors are one of the more distinctive bit of the pod and would also have been one of the more annoying parts to make as there are so many of them.

I pinned my design down to four doors for each pod to make construction easier and ordered 28 doors so I could make 7 pods. 6 for my Tactical Marine squads and 1 for my unit of Sternguard. The rest of the pod is just made out of foamed plasticard for the uprights detailed with card and the bases are just foamcore with card and plasticard trim. Simple really. 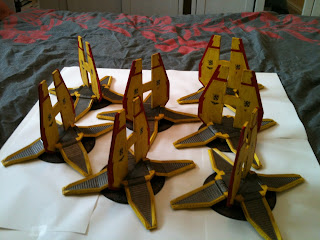 £28 pound for seven drop pods ain't bad. They did take some work but it was an itch I just had to scratch(build)!