Okay I changed my mind!

We've set the points for the Mega game at 8000pts for The Griffons with additional support from Silverfox's marines. It still means that I need to bump the Griffons up by nearly 1000pts.

Thankfully I have some assualt marines & Marneus Calgar to add in and the rest I can do from the stuff I already have that didn't make it into the army list. However I still need to add something significant. With such a large playing area, 12x6, it would be handy to have something nippy to zip about in. My thoughts moved to the Storm Raven.

When I first saw the pcitures of the Storm Raven I quite quickly decided that I did not like it.

I thawed a bit when I saw it in the flesh and since then, and after doing a chop job on the equally ugly Storm Talon, I realised that it was the top of the Storm Raven that bugged me. That turret just looks dumb. To add insult to an already crap design they shoved an engine vent in behind it so that the turret, highly placed as it was, would not have 360 degree traverse. Just Dumb.

Now this has just arrived so I will be getting on with it this week but I have already resolved to:-

A) Leave off that STOOOPID vent.
B) Just have the top turret as the weapons mounted low on a swivel plate not on the sides of the FUGLY Turret.
C) Think carefully about putting some stubby winglets near the front thrusters to echo what I did with the Storm Talon to turn it from an ugly duckling into the lean mean getting shot down killing machine that it is!
D) Put the bolter racks on the side.......cuz this thing is going to be putting Termies into combat! OH YEAH BABY!!! 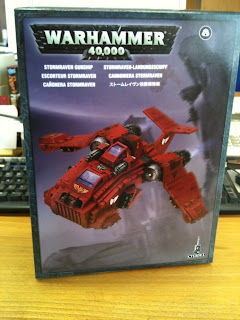 Why do I have the nasty feeling that you'll manage a cheeky kill shot on this thing whilst it is fully of expensive Termies? ;-)

We can only hope - it does mean I can start concentrating on various extra solutions to fill my 1000pt gap!!!!!