A busy couple of months!

It has been a while since my last post but I have been busy!

The GoG have a mega game scheduled and I have been preparing for it. The original idea was for my Howling Griffons to take on Hordes of Orks and we stuck to that idea!

However I wasn't liking the sound of a marine gun line hosing down as many of the Orks as possible before the green tide broke over them so I decided to add a few things to my force. I already had a couple of old school whirlwinds so they were getting a respray from Ultramarine blue to the strawberry and custard of the Griffons. "This isn't enough" I told my self. So I resolved to add more firepower.

I have never seen anyone use a Thunderfire cannon (TC) and, lets face it, that is understandable given that they were cack. Were cack. Past tense as the old artillery rules honked. I am really curious about how the new ones pan out so I decided that my new add-ins were going to be TCs. I'm not quite sure at what point I decided that five was a good number to go for.

Unsurprisingly the price of the GW TCs made sure that buying theirs was not an option. After a shufftie around on the net I decided to use some Antenocenti Workshop turrets and to scratchbuild the gun carriages myself using foamcore, card and old GW tank tracks. 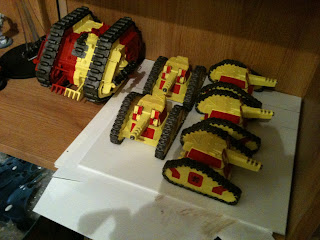 Design wise I decided to try and make them look like they were based on rhino technology. It was pretty simple in the end just to cut out a relief section of card that was stuck onto the foamcore and then given some rivets. They aren't going to win any bauty contests but they will most definately do! To finish them off I've painted some old sevitors up to be the Techmarine gunners.

Parked along side is my MKI Land Raider that has been sat undercoated for about three years and I really couldn't put off finishing any longer. As always happens if you put something like this off, when you get round to it, it takes no time to finish. My Terminator Chaplian will be pleased!!
Posted by Eddy Artillery