And now for something completely different.

The big game at the weekend was a real blast! It was really awesome to see all the 30K armies on the table as I think everyone has really stepped up their game painting wise.

Just a shame that I neglected to take.....any photos at all.

I was really rather caught up in the game so that's my excuse.

However having painted something in the region of 1700 points of Iron Hands since February, I think a break from the scarlet and gold is in order. So this has lead me to start on some of my Dystopian Wars land forces as I've had loads of this stuff lying around for ages untouched. I am resolved to get at least one force of this completed over the next month or so.

Last night saw the start of this with the diddly wee tankies getting their first lick of paint. I suspect that the massed Prussian Empire forces that I seem to have acquired with take a little while to get through. 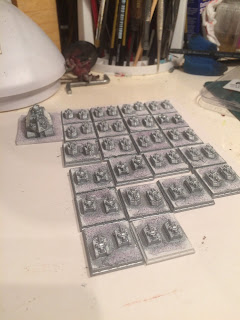 Arse. just noticed that I've missed painting the base trim on that front one. Harumpf.

Excellent work on getting painting again so soon! And why is it you only notice the bit you missed after posting the photo?

I am sure my completed CoA and nearly completed FSA will inspire you tomorrow night,