So firstly an apology as I rather rashly suggested I'd be posting every couple of weeks... turns out work and home decided otherwise!

That said the work project from Hell goes live this weekend so I may, may, be back.

Now I've not been quiet during the last couple of months and have accidentally reached 2000 points with my Age of Sigmar army. I say accidentally because I've just been painting what I fancied and then discovered it all adds up to a magical 2K.

Let me introduce you to my new units who have already been out making friends...

Minotaurs / Bullgors
Part of the Beastmen Faction
GW insist on calling them Bullgors; everyone in our group calls them Minotaurs. Armed with Great Axes because they look cool! They've managed to get into combat once so far in 3 games; they spent the other 2 picking arrows out of their hides... 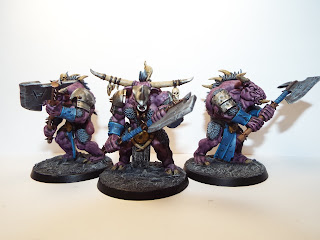 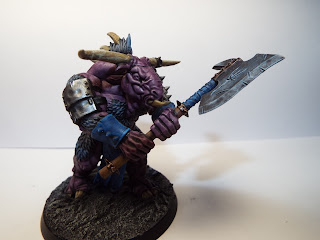 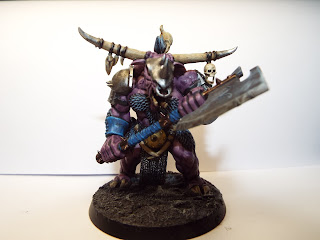 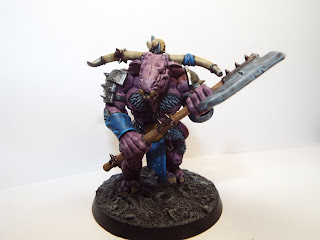 Lots of fun to paint as long as you like painting skin! May need to add a few more of these as they need a banner. Why? Well, because. Sheesh...

Warp Lightning Cannon
This was a joy to paint and has so far been awesome on the battlefield. I painted it because I fancied doing some artillery (steady Eddie) and as I'd already sprayed up the wood with mournfang brown I dived straight in.

The crystal was a lot of fun and I've tried to show the power of the crystal as it cycles up to blast the bad guys. Yes bad guys. Everyone who faces Chaos is a bad guy. Nyah nyah nyah... 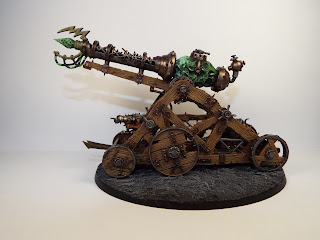 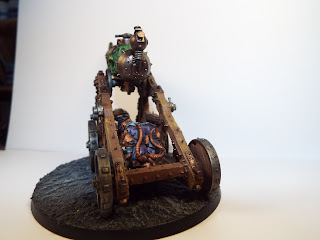 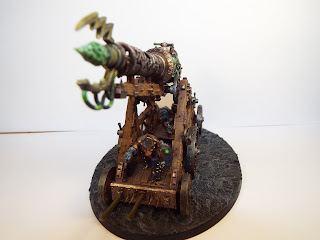 Ghorgon
So whatever Varistat tells you this is not a Cygor. This is a Ghorgon. And yes I painted this one because I wanted to paint something big and scary (and the Cygor is less scary. Honest)

A whole heap of purple wash on this fellow together with more bone painting than an undead regiment of skeletons...

Two battles and two very different results. Skaven fell to him in droves; Goblins laughed at him as he appears to have an aversion to nets. Sounds like several Newcastle strikers I could mention! 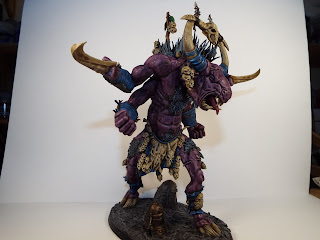 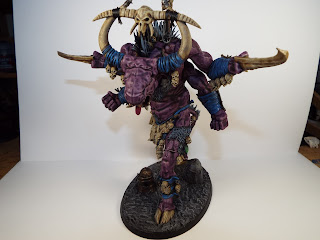 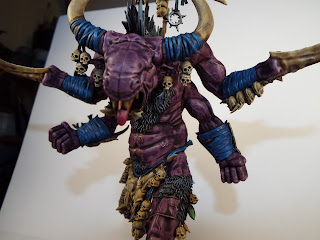 Gorebeast Chariot
And this is one of my favourite models to paint so far. Lots of little details and it had a lot of fun on the tabletop the other night as it is fast!

This chariot is actually in the Slaves to Darkness faction but I have dedicated it to Khorne (it was a complicated ceremony and made a right mess of the carpet) so this is now part of my Khorne Bloodbound!

All weapons are painted orange in my Khorne army. My colleague, Silverback, has audited the model and confirmed all weapons are indeed orange. 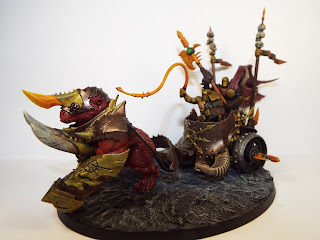 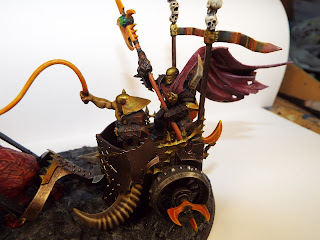 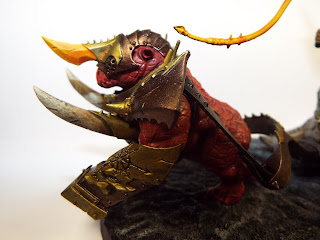 In case you're wandering the orange does not actually contain any orange paints.

I allow the washes to dry horizontally so they don't pool too much. I really do rate the new Citadel Shades.

And finally...
Beastlord
Back to the Beastmen Faction again for a Leader. I actually lack leaders in my army so I'm pleased this guy appeared on my to do list.

I decided to paint his hair as a stand out feature and he went blond. He is now known as Thor Pantene. In his first battle he charged the enemy and did, well, very little. I think he spent the time exchanging hair colouring tips with the Goblins... a little underwhelming so far! 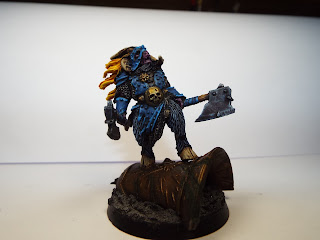 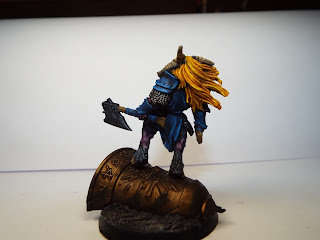 So there we are. Thanks for taking a look and next time: Stormvermin, Or new 40K!

Nicely done! Not so nice to face, that Cygor can be a right brute 😁

Great selection of stuff! I love the Beastlord, and you are correct - big axes are always cool!

The brightly coloured weapon blades really work. They've got a 'just pulled from the fire' look to them.

So love it, Really nice game!