You can teach an old fox new tricks...

Good day to one and all. For those that know me I've been doing this hobby for more years than I care to mention and have improved the collecting, building and playing sides over those many years.

You'll note that painting is missing from that list. Although it has probably improved I don't think I've ever really knuckled down to learning painting and this was something I wanted to address. You see I have so many armies now that speed painting a new one doesn't appeal so much: what I really want to do is take my time and paint up a new and improved army. The next one to be done are the Space Wolves.

During the Summer my son and I spent a week at Warhammer World on what they call a Hobby Camp. You basically spend the whole week from 9 to 5 every day doing your hobby: so you'll build, paint and play. You have access to the staff who will show you how to do whatever it is you want to do. So I decided I really wanted to take my 2D painting and turn it 3D.

My Wolf Scouts won me a Best Painted Unit award at the end of the week as they liked the improvements I'd shown - that was special! I will post them but they're not yet finished and so you'll have to wait.

In the meantime I then decided I needed to practice what I learnt and so the cowboys you see in the pictures below have been painted in the last 2 weeks.

So what's new? Layering. Note the shading in the trousers and shirts - done with layering primarily rather than washes. 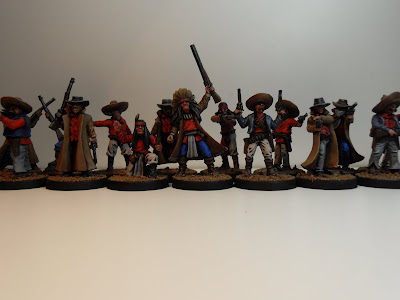 Highlighting - although I knew the concept I'd never studied the colour hierarchy. Here you'll note highlights on the trench coats, jackets and hats primarily. 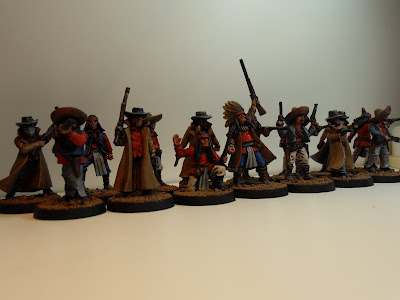 Strong Colours - I've used the red shirts on all the models to tie them together as a posse rather than a bunch of individuals. Up to now red has always been a pain to paint for me but with layering and working up to Blood Red it's so much easier! 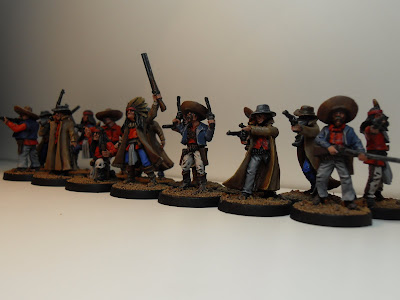 This shot gives a better view of the hat highlighting. The bases are a simple sand washed with Devlan Mud and then drybrushed lightly with Graveyard Earth. 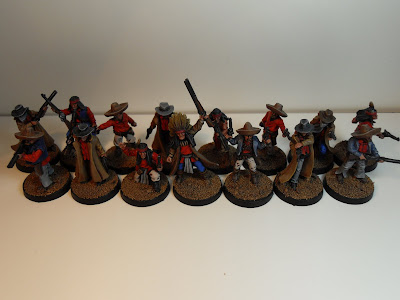 One of the biggest things I learnt was watering down the paints. I know this sounds so simple but I've never really bothered before as I wanted the one-coat solution. I was taught how to water the paint in the lid so that you don't need a tile and when you've finished the watered paint falls into the pot thus keeping it fresh and also keeping the wastage down. So these models are all done using thinned paints as well.

Some of these pictures blurred a bit - must get used to the camera.

All figures are from Black Scorpion.
5 Indians including the Outlaw Chief. 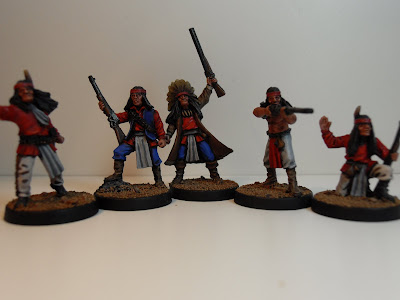 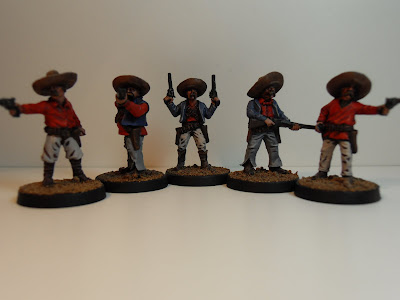 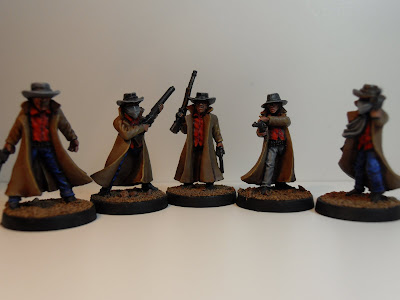 And there you have it. I also learnt how to mix colours so expect that on my next paint job - the Daemon Prince pictured previously. Oh and I will be experimenting with faces more soon as well.

I was asked the other day what the one best tip was that I learnt during my week at GW HQ. Having had a chance to think about it I have to say that the best thing for me is the fact I've been given the confidence to experiment and push myself with painting. I'm energised again!!
Posted by Von

Very nice, glad to see you really getting into the painting side of the hobby. Sometimes seeing the Golden Daemon winners and pro painters is a bit depressing and makes people forget anyone can get to a good level with a bit of practice and time.
Good stuff!

Excellent stuff Nick, they do look very nicely shaded. I'm going to steal the idea of watering paints in the lids, as I can never be bothered to do that on tiles either.

Cowboys (and things where you need less miniatures than a full blown army) are a great way to practise new techniques and push yourself as you don't need to apply it to 100 models!

I don't want to sound rude to all your other models because I think you turn out good models, but these are very very good indeed.

A couple of the pics look as if you have lifted them off the website of the seller.

Well done you for identifying an area of improvement and going for it.

As you all know this is something I am trying to embrace as well, rather than a base coat, a wash and a highlight.

I want a force to be proud in when I play, as I am sure Nick will be when he uses these.

Right then, shall I dig out the trainset???

Cowboys is most definitely next on the agenda.... Or is it warmachine still?!?!?

Silver...these are really cool, I like the Mexicans and Outlaws best!

Keep up the good work mate. Don't be too critical either...I ove the look of some of your existing armies as well!

Thanks for the kind words everyone. Constructive critical analysis is always welcome :-)

BFG - no worries on me becoming overly critical: I'm not planning on changing what I've done and I too am very pleased with the latest armies (in particular World Eaters, Daemons and Tzeentch). For the future I now have new ideas and ways of, hopefully, improving on what has gone before!