6th edition has re-affirmed the need for more feet on the ground, particularly your scoring units. It seems that each and every Codex that appears is carving huge points values off the scoring units.

I haven't owned a horde army before but now I seem to have several. My Daemons have gone horde-tastic and no doubt more on them to come, whereas my previously non-horde-like World Eaters have acquired a nice cheap unit in Cultists.

Now one thing that Kharn is very good at is killing his own side in combat and every time he does that to a Berzerker I cringe inside. They is expensive. I'd rather he didn't slice them up.

But eureka and all that: how about giving Kharn a new horde squad to play with? Genius. So here are Kharn's Krew - all 32 of them in their first WiP outing. 3 Flamers to hopefully deter too many charges against them, a champion for the inevitable challenge and then 28 other bodies for Kharn to waltz through. 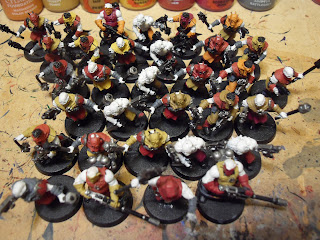 At only 4 points a pop I'm more than happy for these boys to take a pounding from the main man himself. They are also fearless whilst Kharn is in play so that's very nice to. 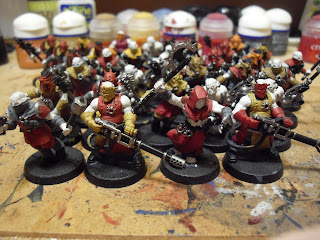 What's more they are a scoring unit so cannot be ignored. This unit of 32 comes in at 153 points (no Mark of Khorne as that adds 64 points to the unit). Yes that's cheaper than Kharn himself. Ridiculous right?

I've also acquired another 6 autogun armed Cultists who will be joining the existing squad to boost their numbers to 16. Well I have to. The 10 man squad is not very Khornately numbered now is it?

Tried to keep the colour palette down whilst also varying the figures. Think there's 7 main colours in the squad plus Flesh and Metal colours. They will all be tidied up and washed down with Earthshade and others to blend them into the World Eaters army. Then all I have to do is base 32 figures. Oh joy!

Always weird looking at WIP pics of forces and this is no exception.

Yep that is a lot of chopping!! I have taken a leaf out of your box Foxy, my Black Legion now has squads of 20...it's the only way to do it!

Yep that is a lot of chopping!! I have taken a leaf out of your box Foxy, my Black Legion now has squads of 20...it's the only way to do it!