The next unit in my fledging daemon army is one of 20 bloodletters...... And boy do these come in lots of parts!
2 separate legs, head in two pieces, body and two separate arms. Lots of cutting and filing off the flash lines for them to be ready but I still think they need some green stuff filling around their waists and foreheads. Definitely a job for another day......
Anyway, the champion is a conversion using an old bloodletter axe, from when they came with those, and a beastman body. This makes him stand out a little, which will mean I have no excuse when he dies in a hail of fire because I've put him at the front of a unit.
I've used the same resin industrial bases which ties them into the rest of the army and also gives them a pleasing weight on the bottom. 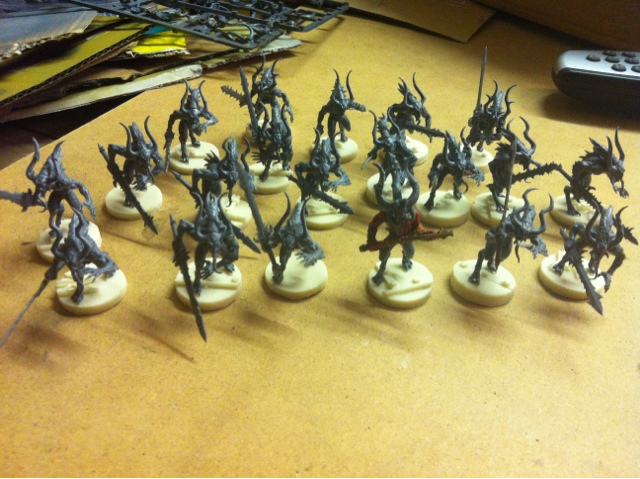 Following the green stuff, a paint job in traditional red awaits I think. I have quite a few of these part-built for a few years now; so hopefully seeing years may inspire me. :)

They are lovely figures (swords a little too long, even for "heroic scale daemons) but it certainly doesn't surprise me that people would leave them half finished given the sheer number of bits to clip, clean and glue.

Here's hoping the green stuff and painting is quick!

I didn't green stuff mine, more added more plastic glue in delicate places to melt the plastic in small areas.

To be honest, once painted you barely notice the gaps at all.

What the??? Where'd these come from...no wonder Urn struggles to fill a 1500 point army in 40k....focus man...focus! Ooh unless all these are just allies to your main army? What a good idea...answering your natural urges while building a formidable force I like it...all I need now is to be abke to include Ogryn in mine somewhere.....