One of my usual Ebay suppliers, The Troll Trader, posted a gaggle of auctions recently rather than just the normal discount Buy-It-Nows. These auctions intrigued me mainly because they were for a load of different Spartan ranges. There was stuff for Dystopian Wars, Dystopian Legions and even stuff from the new Spartan scenery range.

I took a punt on a couple of auction but was quickly outbid and it became apparent that there was quite a lot of interest in them when one in particular caught my eye. A 28mm scale Invincible class gunship designed to be tabletop scenery.

Now I have any found it annoying that all these Sci-Fi games we play seem to be so devoid of aircraft both in the games and as objectives/scenery. Thankfully this has changed on both counts now with the abundence of flyers in the game and now with HDF scenery making large scenery pieces more viable.

So when I saw the auction for the Invincible I just had to have a punt. To my surprise I won! I also got it for a really good price saving nearly £40 from the listed price. I suspect that, as scenery, it was something that people were not as stressed about compared to some of the other items on the Troll Traders auctions. 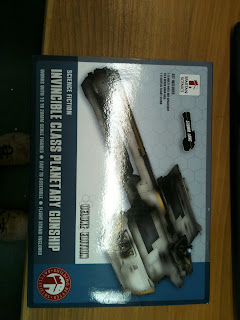 Ebay is your friend when it comes to hunting down bargains, and the troll trader does some really good deals every now and then