Last night saw the start of the 52 games in 52 weeks challenge that a few of us are trying to achieve.

I was a bit daunted by this part of this years gaming objectives as this would, being honest, be an unprecedented level of gaming for me. However we got off to a flying start......well with the long term target.......not so much with the Zombicide: Black Plague mission that Junt, Urn and I were trying to beat.

First attempt last night started okay but we got scuppered by the bleedin' Necromancers getting extra activations that meant they could scarper off of the board. Same with the second attempt. On the third game I sorely tried to lose it for us by nearly having King Mortimer and Gilbert the knight eaten alive but brave Xenia stormed to the rescue.......no....I'm serious.

It was still pretty touch and go with the heroes being chased off of the board by a ridiculous conga line of zombies that keep getting extra activations to bring them ever closer to us. However we did escaped along with all the objectives achieved and no heroes eaten. 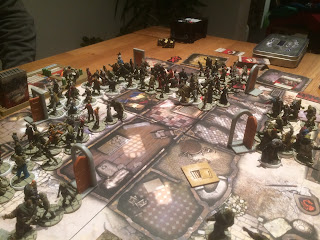 Z: BP is a great game. It has a very different feel to the original Zombicide but is still pretty challenging at times. The clearness of the game lies in the built in experience and zombie escalation mechanism which builds the difficulty and tension very well.

All things being equal, Game 4 and possibly more will happen tonight with a round of Gorechosen at Urn's Gaff.