Since I started my 365 challenge on the 10/12/17 I have been plugging away at the Seraphon Saurus Warriors. 36 of them takes a while especially with all the little bits of bronze on them let alone all the teeth!

They've been given their gloss varnish and their Matt coat but now need basing. I've got the 40+ skinks at the same point and on Tuesday night I spent several hours adding some jungle foliage to their bases. I didn't even add the stuff to all of them but it took ages! 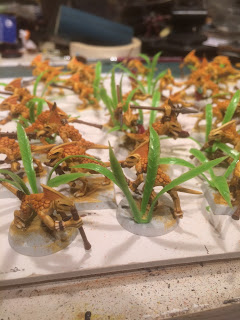 Just texturing and painting to finish these now. I suspect that'll still take a while given that there's 80 odd of the little buggers to do! I usually try to get the slower elements of an army finished first and that is certainly true here but this does mean that I get to move onto the big Seraphon now! Yippee!!

One of which will be the recently finished Sammy the Dread Saurian. 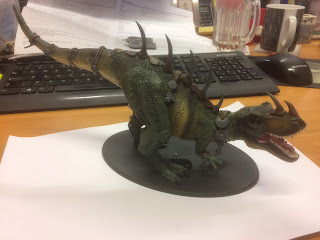 Just a £15.99 T-Rex from Ebay with some modelling clay and Seraphon spares added on. He got an undercoat yesterday lunchtime and has now returned home to join the next wave of painting.

Most of the little Seraphon aren't particularly colourful so it will be good to move onto the larger ones as I'm planning to do more striking patterning on the big nasty beasts. I finished the Scar Warrior and I'm pretty pleased with how he has come out. 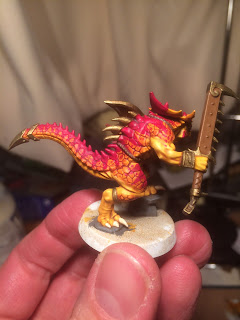