The second gaming night last week turned out to be a couple of games of Gorechosen at Urn’s gaff.
It’s such a jolly friendly little game. Simple premise: bash each other’s brains in.

The game mechanic revolves around the hand of cards issued to the players each round with each card offering options to the player to either move, attack or do something else…….often quite tricksey! It is simple but provides an excellent level of tactical choice to the player. 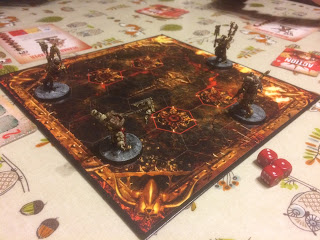 In the first game, poor old Silverfox got bashed around by all of us before succumbing to his wounds. My fighter was clearly too busy laughing at his demise because he let his guard down enough to let Urn’s gladiator sneak up and do 28 points of damage in one attack! This amount would have one-shotted a fighter on full health let alone what it did to my poor old champion! Mincemeat!

The Silverbacks warrior used the moment to move into position to deliver the killing blow to Urn…..but was denied by one of the Silverfox’s fan who lobbed a spear through his back dropping him before he could strike! Gutted! Literally! 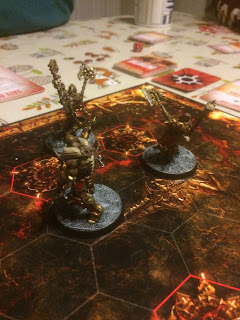 The second game went differently at first with Urn’s fighter being slashed, stabbed and eviscerated out of the game quite early on. That’s what you get if you go around doing 28 points of damage in one round!

The remaining three danced around whittling away at each other. Sadly the crowd didn’t seem to like this slow cautious approach as someone in the stand decided to launch a spear at the Silverback’s fighter, again, managing to stop him in his tracks,……..again.

It must have amused my champion as much as it amused me as it left him guffawing, flat footed and ill prepared to dodge when the Silverfox launched a thunderous blow which connected fully and sealed the Silverfox’s victory!

Great game, surprisingly tactical for such a simple game.