Gaming has slowed a little recently but we’re only in week nine of the year and I’ve managed to get fourteen games in already. Nice to be ahead at this time as I’m sure in will slow down during the summer months.

Game 12
Off to Lenton we went. I trailed behind the rest of the GoGs who got a game in on Friday but I couldn’t escape until Saturday morning. I headed up early and was really excited to see AoS at a bigger scale as I’d only really seen it at a small game level.
I played the Silverback and his awesome undead army of DDDOOOOOOOOMMMMM!!
Horrible. Just horrible. 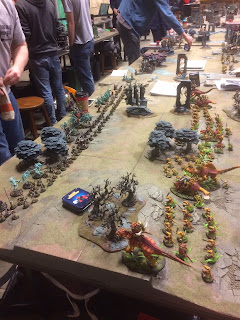 The Mourngul in his army was literally a nightmare causing me now end of problems before I finally managed to drag it down using reinforcements I’d had to summon because the pasting my troops were taking.
Once I’d finally dropped that swine I was lucky enough to be able to move forward to threaten his necromancers and then it was all over for the undead as I could out summon them and there were still some big toothy dinosaurs roaming around.
Awesome game and a really good first proper game of AoS. Ta Silverback!

Game 13
The time was getting on once we’d finished our first games, milled about in shops and generally managed to get ourselves in order. We resolved to play a four way battle between The Silverback, BFG, Urn and myself. I think it was about 1000 points each but it was a throw for fun so it didn’t matter……. 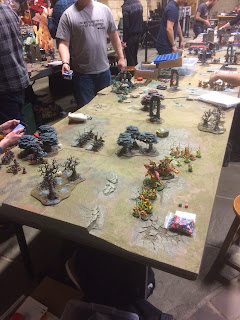 …until Urn started firing his Dark Elf bolt thrower thingy at me! After that the gloves were off!
At which point he gave me a shoeing prior to the BFG joining in. Meanies!
The Silverback won that game as he kept the actual objectives in mind and managed to grab the most sectors on the field.

Game 14
Back to X-Wing at Junt’s house for game 14. We wanted to make sure we were playing through the missions as the last few games had been throw down battles and it is always nice to mix up the play so it doesn’t get stale. Urn had suggested the satellite mission from the rule book so we gave it a try. 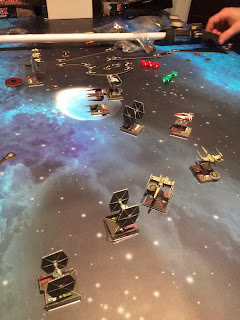 At 100 points it seems somewhat skewed in favour of the rebels because they can get reinforcements. This said I didn’t need them as I didn’t lose a single ship. No shields left and some damage but generally healthy compared to Vadar and his squadron of Imperial Lackies.
I got lucky on the dice in this game with a couple of rounds of pretty tasty shooting. Oh and it didn’t hurt that Junt was playing dodgems not X-Wing. J