I’ve been pretty busy since Xmas but I’ve lacked any real focus. I just have too many fun projects that I want to work on. This does mean that I’ve got lots of progress but nothing getting finished.

I’ve wanted to do a siege game for Horus Heresy (HH) ever since I started collecting an army. I’ve decided to make this a reality, hopefully this year, and as such I’ve purchased some walls, gun emplacements and a TTCombat Gothic Garage which I think will make a good gatehouse. I’m planning to use this on my 3x5 dining room table so this should stretch across the narrow table side just fine. The plan is to have the attackers play up the length of the table.

The scenario will need some thinking about but, given the sterling work being done 30K Heresy Forum to create 8th Edition rules, I should be able to use the fortification rules from the back of the 8th edition 40K rulebook as basis for something fun. 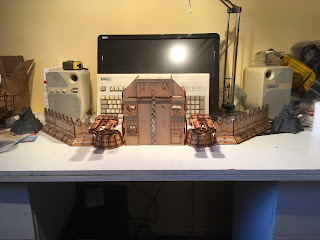 The HH setting does inspire me and I want to vary the types of games we play. Several years ago I’d made some starship interiors scenery. Sort of my own take on a modular Space Hulk type thing. It got messed around with a few times but then stored in the loft. It struck me that it would be pretty good as a Zone Mortalis and this compelled me to bring it down from the loft.

I hadn’t varnished it at the time of making it, something that I regret now. My loft is pretty dry but I think the inherent moisture in the plaster it was made from was enough to let the mould creep in. Sadly some pieces were lost but most were recovered, repaired and giving two coats of Varnish. One Gloss and one Matt. Hopefully that will protect it in future. I also have a plan to add some larger boards to the ZM set so that it can fill an entire 6x4 table. 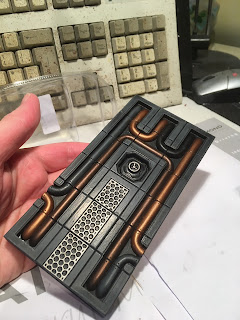 All this HH planning has also had the effect of galvanising me to get more stuff painted for it. I did the Iron Warriors(IW) infantry last year but they sorely need some reinforcements. Now I like the idea of dreadnoughts stomping down ZM corridors in support of the troops so the couple of dreads I had in need of stripping pushed their way to the front of the queue and got themselves a nice bath in Dettol. They came out pretty clean. 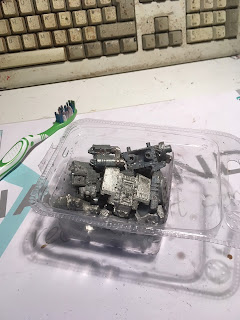 Sitting around for a while has been a tray of terminators for both the Iron Hands & Iron Warriors. These were kit bashed together from a bundle of Scibor bodies that I won on Ebay cheap, Anvil heads and Shoulder Pads all coupled with GW Termie arms and weapons. I like the notion that 30K was a time of innovation and invention giving rise to lots of variation to the weapons and armour that were used.

So the IWs have received two coats of Gun Metal Grey so far. Onto stripes next for them. The IH Termies are started with a heavy dry brushing of Bronze and then a light dry brush of gold. This picks out the trims and lots of the details. Next comes the red colour for the main armour plates to represent the blood of Manus that these surviving IH refuse to wash off until the traitors have been wiped out we all know how well that goes!). 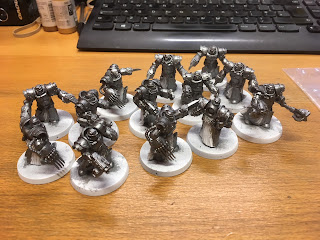 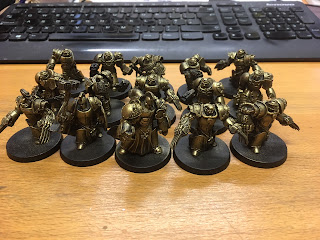 I was given, by a very kind soul, some GW scenery at Xmas. The lovely gothic machinery terrain. It is wonderfully characterful and was one of the first things I put together once the silliness of Xmas subsided. Love these models and I’m looking forward to using them with the ZM terrain. 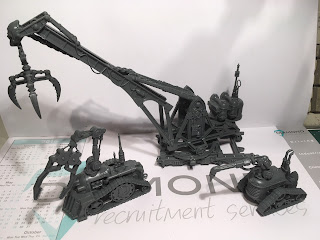 My first wargame of the year was a cracking game with BFG and I using my Seraphon to thwart the machinations of The Silverback and Silverfox’s Chaos forces. Cracking game which I neglected to take any photos of. Still it was enough to spur me on with some additions to my Lizards.
A homemade Dread Saurian has been staring at me from the shelves of holding for some time now so he was treated to a lick of paint to get him started. I was also treated to some Seraphon Cavalry for Xmas by another kind soul and those have been constructed and undercoated. Painting 40 cavalry at once is a bit daunting so I need to get some things cleared before starting them. 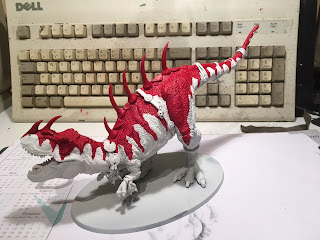 My ongoing endeavours to put together a stonking urban cityscape is still also progressing with the additional of some street furniture from Blotz. 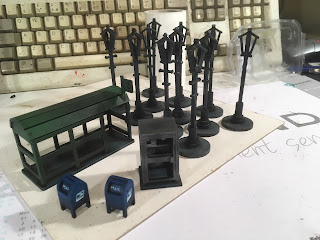 I picked up lots of additional bits for the city at Colours and Warfare and decided to get them under way. This is them all washed and they’ve been spray undercoated now as well. They should add lots of character. 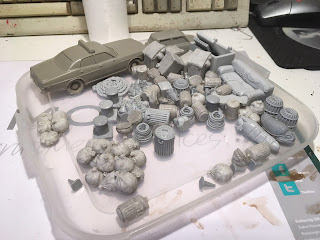 Well I also need some people to populate this city so I’m working on getting the civvies and heroes finished as well so we can get on and have some games. I think some of the folks in this part of town may have dubious professions….. 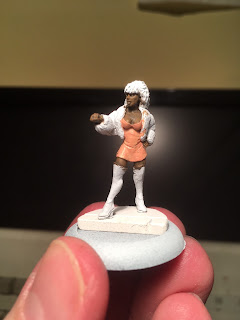 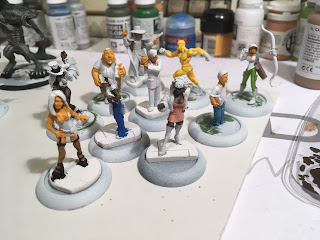 One of the Hero (or Villian) figures I’ve had for a while was a suited hitman type of guy but I didn’t want to have him in a plain suit. Well….there was only one choice really wasn’t there. Let me introduce you to…. 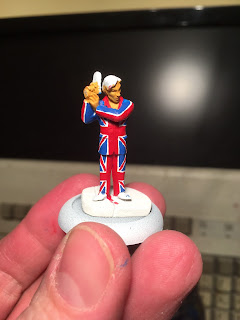 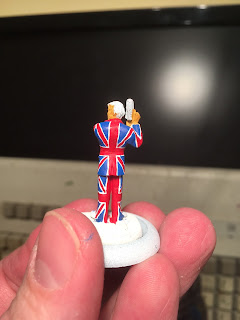 It took the best part of two hours but it was worth it. It still needs neatening up with some white and the colours could do with another coat but he won’t take much to finish after that.

I seem to have entered one of my more productive phases again, which is great, but because I’ve not had my painting mojo for a while I have been concentrating on building. This has meant that the painting queue has grown considerably. I’m estimating that I have 300+ prepped and undercoated waiting to be done. I really should address that!

So goals for this year? Well last year I painted 366 figures. Great but I brought loads as well. Time for a new tactic. I’m going to track Net items painted. So a minus for a painted one and a plus for any new ones brought.

….those 20 mkiii marines I didn’t think I’d win on Ebay but did takes it back to +5.
So this year I must be productive and also resist buying too many figures.

Holy Crud! That's a shed load there my friend and I thought I had a lot of projects on the go...

Mr Patriot is awesome. Just brilliant. How many attempts to get the flag right?

Shame you lost some of that terrain; I remember we had a game on that and it was lovely to play on. Look forward to seeing the finished gaming table for HH. I don't collect HH but can certainly help out whoever needs a bad dice roll or 6 :-)