So, after literally years of playing Flames of War set in the Normandy countryside against Dave’s British Infantry, I’ve finally gotten around to making some nice bocage.


We’ve been through a few different options to stand in as bocage, from the original pieces of square foam lightly coated in green paint (the Silverback was particularly enamoured with those!) and resin 28mm hedges as they were tall enough to block LoS (although just the wrong scale and had no dirt bank).

So the pic below shows the 8 feet of bocage that I’ve put together over the past couple of weeks in between other projects. 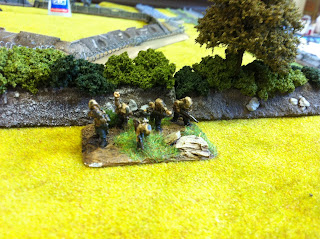 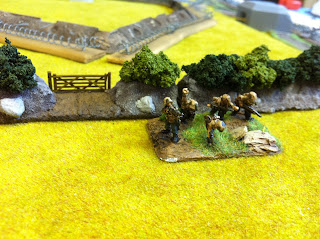 Pretty simple really, plasticard base, square of blue foam in the middle, brown grout to slops the sides to the edge of the plasticard, dip in sand and add a few pieces of kitty litter as larger stones. Dark brown emulsion coat, drybrush light grey and pick out large stones.


Glue gun used to stick clump foliage in different greens to the top, stick the metal tree stems through the foam and glue gun in place and hey presto – some very difficult terrain for all to struggle through :)

I left some with gaps and used model railway fences and a stile to give a bit of variety (and also make it easier to navigate those pieces per the rules I would think) but I thought I’d leave any T-pieces or cross road pieces to Dave if he felt like making them as a project!

And probably just in time for Nick's FJ to defend against Allied attack ;) 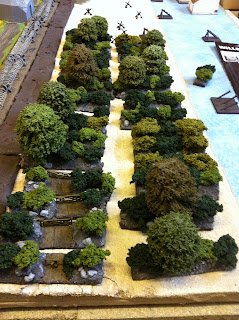 (And yes, I do know they are set up on a beach instead of the countryside in this pic, but that's where they were drying when finished!)
Posted by JamieM

My FJ welcome the arrival of the bocage!