Urn and Von have inspired me to get back to the blog. I had intended to try for one post a week but that has falling by the wayside. I was trying to post finished projects and we've proven that this just does not happen as we hope so I am now intending to fling up more frequent posts even if they are jut work in progress stuff. After all that is what these blogs are about isn't it?

Anyhoo. First off is the recently acquired Ugly Flying Brick Storm Talon. What were GW Designers thinking? I can only conclude that it was one of the following:-
1) Someone snuck into the CGI dept after a few Bugmans brews and tinkered with the design as a joke but it was never picked up before the design was sent to manufacturing.
2) It was designed by a committee suffering from full blown 'Group Think' which manifested as an inability to see the flaws in the design.
3) GW were being asses the day this one was born.

In truth, many elements of the things design do work. Okay...it does look like a Rhino humped an Apache helicopter but it has the correct elements but still doesn't quite work. Why? Well in my opinion it is simply because they tried to make part of it true scale. Just part of it tho'!?! True scale cockpit slapped onto a micro-machine combat helicopter body. But......even that is forgivable compared to the 'chin'. Who. Designed. That?

So my plan is simple de-emphasize the ridiculous chin mounted weapon and then take a view on what to do about the side weapon pods which are also a little on the chunky side.

The kit itself goes together well and apparentley fairly quickly but sadly ones young daughter saw fit to interupt her fathers hobby time so I'll have to try and finish it tomorrow night. I think with the few small changes I am planning to make I will be able to learn to quite like this little model. ;-) 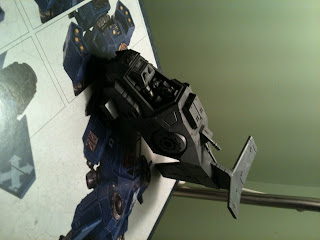 Good shout, both on the posting of WIP and your quest to amend the design! Like you I think it's not too far off being a nice model, the Valkyrie design shows they know how to do it.

Looks promising so far and I'll watch developments with interest....

Cool! Looking forward to seeing what you do with this as I have one sat in a box as well. Damn that store credit :)

Good luck and may the blogging continue!