I got to have a chance to finish the Storm Talon last night. In truth I would have completed it if it hadn't been for......well me.

I spent far to long uming and arring about what to do next. The photo shows the nose guns without the chunky pod and I have to say I had a clear idea what I wanted there so that happened pretty quickly. What I got stuck on is the wings and the lascannons.

Now the wings should be on the side of the engine pods sweeping downward slighty due to the little kink that they have in them. Problem is that I'm not sure if I like it better without the wings entirely!

I was also stumped regarding how to mount the Lascannons onto the fuselage. The side weapon pod are nice little designs in of themselves but I'm not overly enamoured with them sticking out of the sides. I've been toying with the idea of just mounting the Lascannon barrels straight onto the front of the block that the weapons pods are meant to be stuck to and then adding some power pack detail just behind the barrels on the side of the block.

What do you think then guys. Wings? No Wings? Gun pods? No gun pods?

Pretend it is like one of those Saturday night talent shows that hypnotise the masses have ruined TV. In fact it is exactly like them as I, like Simon Cowell choosing talentless numpties, have already decided what I am going to do and any pretence of a vote is a sham. The phone number if you choose to vote is 0800-UGLY BRICK-555 and is charged at £20.00 a second.

Still. It'll be fun to hear your opinions. 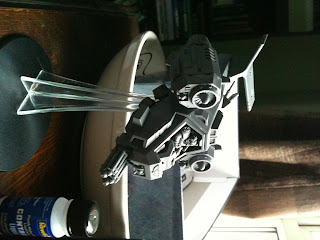 The assault cannon mounting is a big improvement. Is it my imagination, or do the weapons pods make this model look like a hamster?
I think the typhoon launchers are ok, but I would make the lascannons tighter to the fuselage.
Anyone else thinking this is more Blue Thunder than Apache?

I like the amendments but without wings you wonder how it would stay in the air.... As mentioned, 80's helicopter shows do spring to mind but they had a ruddy great rotor to keep them up!

I appreciate the wings aren't big enough to act like a plane without other propulsion systems, but the imperium doesn't had the anti-grav tech of some other races so need to look a little more basic.

Nah! It has got two whacking great engines on the side as well as four vector jets underneath. Admittedly non-owners of the model might not be aware of that.

I think it looks more Sci-fi without the wings. I shall make my final choice tonight. Time permitting.

Definately more Blue Thunder! Not a bad thing in my book. ;-)